Housework and sex: What's the connection?

(LifeWire) -- Jen Simmons loves to watch her husband Danny tend to their two little boys, mop the floor or hang a picture. She also finds it sexy. 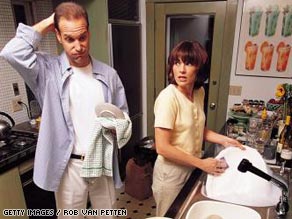 Men do more housework than they used to, a study says, although they create more of it.

"I am very turned on when he's doing housework," says the 36-year-old Camden, Delaware resident, a middle school teacher.

"If there's a sink full of dirty dishes, he knows I'm going to take care of that before I want to get intimate. If he wasn't helping with the housework, I would not find that very attractive."

Simmons' attitude is pretty typical of married women, researchers say. They like it when their spouses share the household chores, but also find that -- paradoxically -- a husband may also create more work for them, or not contribute as much as women would like. In other words, science has once again proven what many people already suspect: Relationships take work, especially when it comes to keeping a happy (and tidy) home.

First, the good news: Men are doing more than they used to, according to findings released in April by the University of Michigan's Institute for Social Research. For example, in 1976, men did about six hours of housework per week; in 2005, that had increased to about 13 hours. Women, meanwhile, decreased their weekly housework from 26 hours in 1976 to 17 hours in 2005. Researchers based their conclusions on economic, health and social data collected on 8,000 American families since 1968.

And, says one expert, a more equitable division of household duties may lead to more intimacy in the bedroom.

"When a man does housework, it feels to the woman like an expression of caring and concern, which then physically reduces her stress," says Joshua Coleman, a San Francisco-area psychologist and author of "The Lazy Husband: How to Get Men to Do More Parenting and Housework."

"A guy can be completely stressed out and want to have sex to burn it off, but women are not wired like that," says Coleman, who is also a member of the Council on Contemporary Families, a nonprofit research organization. Instead, he says, women need to feel relaxed in order to feel sexy -- and it's hard to unwind when there are chores to be done and a husband who's oblivious to them.

Calculate how much time you spend doing chores, working, relaxing »

Now, the bad news: The same research found that men create, on average, seven more hours of housework a week for women. That extra work may not be as obvious as doing the dishes or mowing the lawn. So-called "emotional labor" -- tasks like writing holiday cards, scheduling doctor appointments and planning family gatherings -- is too often left to wives, says University of Michigan sociologist Pamela Smock.

"As long as the invisible labor is borne by women, things aren't going to be equal, even if surveys show they are," Smock says. Such work can be a major source of mental stress, she adds.

And, it must be noted, men still do only 30 percent of the housework, according to a report released in March by the Council on Contemporary Families. That report analyzed data culled from more than a dozen studies over nearly 40 years, revealing wide-sweeping patterns in gender dynamics and housework in the U.S. and abroad.

Paul Pillitteri is one of those husbands who gets it. The Redwood City, California, father of 4-year-old twin girls says the time he spends parenting and keeping house, which he splits duties with wife Amy, 41, is well worth the effort.

"I work out of our house so it's easier to be present and I'm somewhat more flexible," says Pillitteri, 52, an information architect, whose spouse works part-time as a school district supervisor. "I think it creates a healthier relationship with my wife and affords me a closer relationship with my kids. They really get to know who their father is."

Men like Pillitteri may be the exception to the rule, says Barbara Dafoe Whitehead, Ph.D., co-director of the National Marriage Project at Rutgers University, which analyzes trends and attitudes toward marriage in the U.S.

Paper plates to the rescue

Pillitteri's relationship is one that Jennifer Armiger, 33, would like to work out with her own partner -- but hasn't been able to because of his 15-hour workdays as an owner-operator of a trucking business.

The Woodbury, New Jersey, resident is a doctoral candidate in history and primary caregiver to their 4-year-old son, Troy -- a situation she would like to become more egalitarian when she graduates and assumes a professorship in the next six months.

Armiger recently got so annoyed about making dinner and being left with the cleanup, in fact, that she switched to using paper plates.

"He'll walk right past a sink full of dishes," says Armiger, who has served as vice president of leadership for her state chapter of the National Organization for Women for the past two years.

"I've been bugging him for a few months that he needs to be more consistent about doing chores around the house. It will be interesting to see how the next few years unfold."

How to get him to help

"Lazy Husband" author Coleman offers these tips to encourage men to pull their own weight:

• Don't be a gatekeeper: Partners who aren't micromanaged tend to contribute more.

• Don't send mixed messages: A woman may telegraph ambivalence by asking her partner to help, but then tell him he's doing the task all wrong. Or she may not ask him to help at all, then become angry that she has to do everything herself.

• Be assertive: Insist on an equitable division of labor if he won't take initiative. Say something like, "You agreed if I cooked, that you'd clean. You haven't done that yet, so can you do it now or tell me when you will?" Or, "I feel I have too much on my shoulders. What can you agree to do?"

• Communicate productively: "You're never going to get your husband to do more if you walk around broadcasting blame and shame," Coleman says. Approach your partner with affection, keep the conversation brief and to the point, and use language that doesn't veer toward criticism.

All About Relationships • Marriage