WASHINGTON (CNN) -- Republicans were facing pressure Tuesday to vote for a rollback of across-the-board cuts in Medicare payments to health providers after a major doctors' group said the cuts could lead to a "meltdown" of the government's health care system for the elderly. 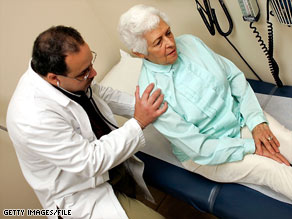 Doctors say they would take on fewer Medicare patients if the cuts go into effect.

On Monday, Senate Majority Leader Harry Reid, D-Nevada, called several Republicans trying to persuade them to support a bill that would reverse a 10.6 percent cut in Medicare payments to doctors.

The cuts in Medicare payments -- part of a scheduled cost-saving formula -- went into effect July 1, although the Bush administration said it will hold off on processing claims until mid-July to give Congress time to reach a compromise.

The Medicare system pays for the health care of roughly 40 million elderly Americans. Rising health care costs have made Medicare a growing part of the federal budget, and the stress on the system is increasing as more baby boomers reach retirement age.

Similar cuts have been scheduled to go into effect on July 1 in previous years, but Congress always has voted to stop the cuts before they went into effect.

Gerald Harmon, a family physician who practices in Pawleys Island, South Carolina, said the cuts could lead to doctors taking fewer Medicare patients, making it difficult for the program's elderly patients to get the care they need.

"This Medicare access problem is a real issue, not just a political football," said Harmon, who said 35 percent of his patients were eligible for Medicare. "It affects your dad, when he's sick. It affects my patients in my practice. This has to be addressed."

A vote on the bill last week fell one shy of the 60 needed to clear a Republican filibuster and advance in the Senate.

Senate Republicans joined the White House in objecting to the Democratic-back bill because it paid for the increased payments to doctors by trimming government support for private insurance programs that provide coverage to Medicare patients. The private Medicare programs are a top policy initiative for Republicans.

The issue has become the subject of an intense election-year lobbying and advertising campaign aimed primarily at its GOP opponents.

The American Medical Association, a powerful doctor's group, said its members may be forced to reduce service to Medicare patients if the cuts go into effect.

According to a recent association survey, 60 percent of physicians will be forced to limit the number of new Medicare patients they can take on if the July 1 cuts go into effect.

"We stand at the brink of a Medicare meltdown. ... For doctors, this is not a partisan issue -- it's a patient access issue," AMA President Nancy Nielsen said in a statement after the Senate vote last week.

The AMA ran radio and TV ads over the July Fourth congressional recess targeting 10 Republican senators, seven of whom are up for re-election.

The AARP, the nation's largest organization of retired persons, and other groups also are weighing in against the cuts.

Reid has "no idea" if the pressure has changed any minds, but the "proof will be in the pudding" when senators vote again to break the filibuster, said Jim Manley, a spokesman for the speaker. That vote is likely to occur Wednesday.

"There is clearly a lot of pressure," Sen. Max Baucus, D-Montana, chairman of the Senate Finance Committee, said Monday. Baucus said he has talked to several Republicans and "there are a few" who could switch their votes.

But GOP lawmakers and aides gave no indication the intense lobbying had changed any minds, and even if the bill does pass the Senate, it may still face a presidential veto.

Republicans "are holding out for a compromise that can pass and the president can sign," said a top GOP leadership aide.

At the heart of the dispute is the decision by Democratic lawmakers to pay for the "doctors' fix" by cutting funds for Medicare Advantage, a program administered by private insurance companies that is generally favored by Republicans and opposed by Democrats.

The program, which has more benefits than traditional Medicare, is also more expensive.

Republicans -- joined by the insurance industry -- fear Democrats are trying to weaken the Medicare alternative by draining funds away from it.

President Bush has threatened to veto the legislation because of the cuts to Medicare Advantage -- so that even if Democrats get one additional vote to beat a filibuster, they will need several more to override a veto.

The House of Representatives passed the bill 359-55 with broad Republican support in June, but the two-thirds vote needed to override a presidential veto appears, at the moment, to be an insurmountable barrier in the Senate.

"Our goal is to get a result," said Senate Minority Leader Mitch McConnell, R-Kentucky. "A vetoed bill is not a result."

McConnell on Monday pressed for a monthlong extension of the current fee schedule so senators could work on a compromise.

CNN's Ted Barrett and Miriam Falco contributed to this report