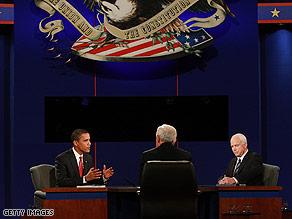 The poll also suggests that debate watchers' favorable opinion of Obama rose slightly during the debate, from 63 percent at the start to 66 percent at the end. The poll indicates that McCain's favorables dropped slightly, from 51 percent to 49 percent.

The economy was the dominant issue of the debate, and 59 percent of debate watchers polled said Obama would do a better job handling the economy, 24 points ahead of McCain.

"Independents tend to prefer debates that are dominated by substance and light on discussion of personal characteristics," said Keating Holland, CNN polling director. "The perception that McCain attacked Obama gave red meat to GOP partisans, but it probably didn't help McCain with independents."

"There was a notable gender gap as well," Holland said. "Women thought Obama won the debate by a 62 percent to 28 percent margin. Among men, Obama's lead was narrower, 54 percent to 35 percent in Obama's favor."

During the debate, McCain demanded to know the full extent of Obama's relationship with William Ayers, a 1960s radical. But the poll suggests that line of attack may not resonate with Americans. Fifty-one percent of debate watchers said Obama's connection to Ayers didn't matter at all to them, with 23 percent saying it mattered a great deal.

The audience for the debate poll appeared to be a bit more Democratic -- and a bit more Republican -- than the U.S. population as a whole. Forty percent of debate watchers in the survey were Democrats and 30 percent Republicans.

The candidates first debated in Oxford, Mississippi, on September 26. Fifty-one percent of debate watchers polled by CNN and the Opinion Research Corp. said Obama won that debate, with 38 percent saying McCain performed best. The second presidential debate was held in Nashville, Tennessee, on October 7 and 54 percent of debate watchers polled said Obama won, compared with 30 percent who said McCain did the best job.

The post-debate polls do not reflect the views of all Americans. They only represent the views of people who watched the debates.

The CNN/Opinion Research Corp. poll was conducted by telephone Wednesday night, with 620 adult Americans who watched the debate questioned. The survey's sampling error is plus or minus 4 percentage points.

All About John McCain • Barack Obama