WASHINGTON (CNN) -- -- With six weeks before taking office, President-elect Barack Obama is having one heck of a honeymoon, a new national poll suggests. 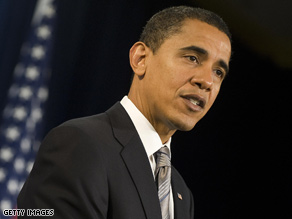 Nearly eight in 10 Americans questioned in a CNN/Opinion Research Corporation survey out Tuesday morning are giving the president-elect the thumbs up when it comes to his handling of the transition.

Seventy-nine percent approve of Obama's performance so far during transition, with 18 percent disapproving.

"An Obama job approval rating of 79 percent -- that's the sort of rating you see when the public rallies around a leader after a national disaster," said Bill Schneider, CNN's senior political analyst. "To many Americans, the Bush administration was a national disaster." iReport.com: Dear Mr. President...

"Bush came in promising to be a uniter, not a divider. That's a promise Bush failed to deliver -- as he himself acknowledged last week in an interview with ABC News when he said that one of his big disappointments is that the tone in Washington got worse rather than better," Schneider said.

"Nearly 80 percent describe Obama as a uniter. So far, so good."

The Democratic party continues to be much more popular than the GOP. Six in 10 have a favorable view of the Democratic Party, while a majority have an unfavorable opinion of the Republican party.