Katherine Dvorak is a writer for the Daily Collegian, the leading news source for Pennsylvania State University. This article was brought to CNN.com by UWIRE, the leading provider of student-generated content. UWIRE aims to identify and promote the brightest young content creators and deliver their work to a larger audience via professional media partners such as CNN.com. Visit UWIRE.com to learn more.

(UWIRE) -- A Web site developed this year that allows students to share old exams online is causing debate among professors about its ethical implications. 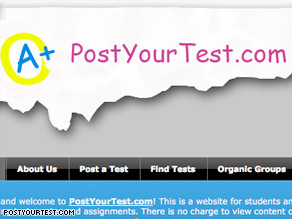 PostYourTest.com creator Demir Oral says the site is a tool for education, not for cheating.

PostYourTest.com is an educational tool that lets students anonymously upload materials and tests from their previous and current classes, said Demir Oral, creator of the site.

However, there are teachers who do not want their tests to be posted for every student to see.

"I would not be happy if a student who had taken a class of mine had taken an exam and posted it online," Sarah Hall, graduate professor of psychology at Penn State University, said. "I know that some teachers reuse past exams and it would be hard to have to write a new test for every class."

However, Mary Bojan, professor of chemistry at PSU, said she wouldn't mind if students posted her tests online.

"For my classes I always write new exams every time, and I wouldn't object because I have some old exams up online that I've posted myself," Bojan said.

Currently, there are no tests online for Penn State University, because the site was developed on the West Coast, Oral said.

"Primarily the main audience is San Diego, but that's because I've only advertised around there," Oral said.

He said he is looking into expanding the site more to include universities and colleges across the country.

"Also, although I am still focused on the United States, in the future I would like to go global," Oral said. "I think it would be really effective worldwide."

While studying for an exam in the HUB-Robeson Center, Christal Cozier (senior-nutrition) said she would consider using the site.

"I think looking at an old exam helps -- it at least gives the student an idea of how the teacher poses questions," Cozier said.

While she said she wouldn't go through the trouble of posting a test herself, Cozier said she didn't think students posting old tests online would be a problem.

"Most teachers give out practice exams and old exams anyway," she said. "The only time I would think it would be a problem is if the teacher uses exams more than once."

In response to criticism of the site from professors, Oral said he wants people to know the site is a tool for education and not a tool for cheating.

He added teachers can ban their exams from the site if they don't want students sharing them online.

"The first professor that banned his exams said he wanted to ban them because he was copyrighting them and publishing them in a book, and that made total sense to me," Oral said.

Even with the option to ban tests, Tara Chismar said professors may not know the site exists and may not know to ban their exams from it.

She said the site might be OK only if students get permission from their teachers to post exams online.

Bojan said the biggest problem she saw with students posting material online would be putting up tests the teachers wanted handed back in.

"Common sense needs to come into play with something like this because there's a student responsibility side to it," she said. "Having access to an exam you're not supposed to is cheating."

Students shouldn't have to rely on old tests online to prepare for an exam from a new teacher, Hall said.

"There are likely a lot of professors who would be happy to give students more of a sense of what the exam is going to be like -- maybe giving them sample questions," she said.

Bojan warned students should use materials posted online wisely because looking at an exam may not always be the best way to study.

"One problem is old tests may not be the most effective study tool," she said. "By just going off of old exams students aren't learning how to actually do the problems."