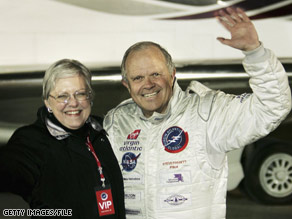 Steve Fossett, seen with wife Peggy in a 2006 photograph, disappeared in September 2007.

A weathered sweat shirt, cash and a pilot's certificate with Fossett's name were found Tuesday near Mammoth Lakes, police Chief Randy Schienle said. The certificate did not have a photo, he said.

"We're not certain that it belongs to Steve Fossett, but it certainly has his name on the ID," Schienle said.

Fossett, who was 63, was last seen on the morning of September 3, 2007, when he took off from the Flying-M Ranch outside Minden, Nevada, in a single-engine plane.

He said he was embarking on a pleasure flight over the Sierra Nevada mountain range.

No plane wreckage has been found, but a multi-jurisdictional team would return to the area of the discovery to search by air and on foot, Schienle said.

Fossett made his money in the financial services industry, but is renowned for his daredevil exploits, which include nonstop, round-the-world trips aboard a balloon, a fixed-wing plane and a boat.

He was the first person to circle the globe solo in a balloon, accomplishing the feat in 2002, and the first to fly a plane around the world solo without refueling, which he did in 2005. He also set world records in round-the-world sailing and cross-country skiing.

All About Steve Fossett • Sierra Nevada