Commentary: Haiti's woes and you

By Mia Farrow
Special to CNN

Actress Mia Farrow has traveled extensively as an ambassador for UNICEF, including trips to Darfur, Angola and Chad, and has been active in the organization for 10 years. Farrow starred in the film "Rosemary's Baby" and has appeared in many other films, including "The Great Gatsby," "Death on the Nile," and "Hannah and Her Sisters." In 1997, she published a memoir, "What Falls Away." 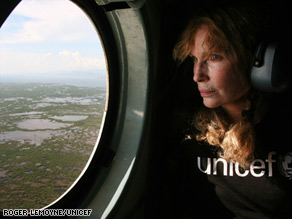 Mia Farrow views flooding in Haiti on a trip to the country devastated by a string of recent storms.

(CNN) -- I have just returned from my latest trip as a UNICEF Goodwill Ambassador. Once again I found myself in one of the world's poorest countries; once again I held children with stick limbs and distended bellies.

Again, most of these children are without clean water, adequate food, basic health care and the opportunity for an education. Again, before they reach the age of five, many will die from preventable diseases.

But this visit was not to Africa. These are the grim realities for the people of Haiti, just one hour from the shores of the United States.

Haiti is shattered by decades of poverty, violence, bad governance and neglect. There is little infrastructure, no jobs for 75% of the population, child trafficking is common, there are countless orphans and street children.

Then a few weeks ago, things got a whole lot worse for the people of Haiti, when the first of four hurricanes pounded their shores.

The damage wrought by Fay, Gustav, Hanna and Ike is beyond imagining or describing. Whole cities and villages are devastated, fields and crops lie beneath water. Roads and bridges are washed out. Many areas remain inaccessible to relief workers. We cannot yet know how many have perished.

During that first week of September, water, some nine feet high, tore through the coastal city of Gonaives, sweeping people and their possessions away, shredding houses and shops. Gonaives was home to more than 350,000 people.

Today, thousands are still stranded on rooftops, more have crowded into schools and churches. Although the water has begun to recede, the city is choked with mud.

The hills behind Gonaives slid down and churned the broken things and people too into a thick, terrible soup. I have never seen or imagined there could be so much mud.

Still, here and there I saw people wading though the mud in search of belongings, or washing their clothes in the putrid water. I saw a man doing his best with a single bucket to haul the mountain of mud out of his house.

"We need food and water," an old woman cried with her arms outstretched. "Our children are sick," said another. The light streamed through the high windows of the cathedral in Gonaives. It was an eerie sight.

The pews had been tossed aside like matchsticks clearing a vast open space where a child, waist-high in mud, moved toward me with large, unsmiling eyes.

In the crowded, sweltering choirloft where hundreds of families had taken refuge, there is no water, no toilets, no food. Infants were sprawled on a dirty floor, and emotions were raw from fatigue, hunger and desperation.

I visited an orphanage where the children had been huddled on the second floor for these long three weeks. (The ground floor was filled with mud) There I met a little boy named Watson, who greeted me with a smile and a fist pump. As I was leaving, he said: "Stay with us." I told him that I couldn't but promised I would come back. Watson said. "I will pray for you."

I know as I write this, Watson and the other orphans are still on the upper floor of the orphanage, the babies are still sleeping on the church floor, the man with his bucket is still hauling mud, families are still stranded on rooftops and they are still hungry in sweltering makeshift shelters.

While the tsunami prompted a generous and immediate response from the international community, the situation in Haiti has largely gone unnoticed. Haiti and its people urgently need our help - especially the most vulnerable, the children.

The enormity of this catastrophe has overwhelmed the impoverished Haitian government and the UN agencies that are struggling to sustain human life there.

International and local aid workers on the ground have made a remarkable commitment to provide humanitarian assistance. But they cannot do it alone. I realize these are not easy times for Americans. But a small donation goes a very long way. For many of these families, who are, after all, our neighbors, it will mean the difference between life and death.

All About Haiti • Hurricanes and Cyclones • Disaster Relief