MOSCOW, Russia (CNN) -- Young women in bright miniskirts and high heels line up to sell themselves in the dingy back streets throughout the Russian capital. Moscow's illegal flesh markets are flourishing, with up to 30 women at each pickup point, or tochka, standing in order of price for the night. 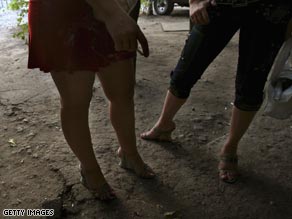 Russian police acknowledge that human trafficking for sexual exploitation is a major problem.

Customers light up the lines with their car headlights and are asked to pay between $100 and $700 for a woman.

Aid workers for groups fighting for women's rights say Moscow is witnessing a surge in prostitution, including forced prostitution, as a result of Russia's booming economy.

They say thousands of young women are made to work as sex slaves on the city's streets, unable to escape from the ruthless and violent criminal gangs who traffic them.

"It's because of the economic boom they are brought here," said Afsona Kadyrova of the Angel Coalition aid agency, which rehabilitates trafficked women and children. "The fast pace of development in Moscow has fueled demand for a range of cheap workers, including prostitutes."

To investigate the thriving trade, CNN went undercover posing as potential customers and gained access to speak directly to the prostitutes and their pimps.

"Take your pick from any of the girls," the female organizer said at one location, lines of women all around. "The expensive ones are on the right, for $600 and $700 a night. The women on the left are $100."

Aid agencies say many of the women working here are tricked into coming to Moscow on the promise of an education or a good job. They say others are simply kidnapped from their hometowns and forced to work as prostitutes in Moscow.

Watch one woman describe how her uncle duped her into prostitution »

Russian police acknowledge that human trafficking for sexual exploitation is a major problem, saying they do what they can to fight it by raiding brothels suspected of forced prostitution and arresting gang members who run them. But the problem, they say, lies elsewhere.

"First of all, we have virtually open borders, and badly controlled migration flows from nearby countries," said Alexander Krasnov of Russia's Interior Ministry Police.

"Secondly, we still don't have a basic law that defines victims' rights. At the moment, it's mostly aid agencies that deal with it."

Aid agencies say they are handling a growing number of deeply traumatized victims rescued from brothels and pimps in the Moscow area. One U.N. organization, the International Organization for Migration, recently opened a treatment and rehabilitation center to cope with the large numbers of sexually exploited and trafficked women who come for help.

At this center, Christine, a 27-year-old Nigerian woman, tells how she acquired a painful 4-inch scar across her right cheek. She says she was lured to Russia from Nigeria four years ago by her uncle. He promised to give her a college education, she says.

But instead, she says, he sent her to a Moscow brothel. He told her "the kind of job I'm going to be doing is prostitution."

"I ask him, 'Why prostitution? Why not another job to pay the money?' He says I didn't speak the language. I cannot do any other job."

She added, "It made me feel very bad. I felt that I'm not going to do it over my dead body."

But when she tried to run away, her uncle cut her face, says Christine, who asked that her last name not be used.

"He made me know that if I don't cooperate with him, something bad will happen to me -- that if I made an attempt to run away, it would end in taking my life. So I was really scared about that," she said.

Aid workers say Russia has become a prime destination for trafficked women from Africa, the Far East and former Soviet states. There are no exact figures, but aid agencies estimate that thousands of trafficked women are on Moscow's streets.

"Before, it was just a country of origin for Europe and the U.S. and elsewhere in the world," Kadyrova said. "But right now, we see that Russia has become a destination country also."

According to the group's Web site, human traffickers "prey on the dreams of impoverished women seeking employment and opportunities for the future." Most women are young and single with little education; some are orphans and college students; others are married with children.

"All of them are lured by advertising images of a beautiful life beyond the borders of their homelands -- making them easy prey to the thousands of traffickers advertising in newspapers, on radio, television, in the metro and on the streets for wonderful work abroad with no experience necessary," the group says.

For millions, Russia's new economic prosperity has been a blessing. But for those caught up in the sex trade, it's a curse.

Christine managed to escape after meeting a woman from a church who helped her. "I was crying all the time, telling her, 'I don't want this kind of job,' " she said.

All About Human Trafficking • Moscow • Russia