(CNN) -- An 11-year-old California girl snatched from the street in front of her house in 1991 had two children with the man accused of taking her and was forced along with the children to live in backyard sheds, police said Thursday. 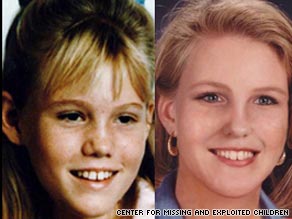 Jaycee Lee Dugard as she looked in 1991 and an age-progression image of what she might look like as an adult.

"From what they have both said, he fathered both of those children with Jaycee [Dugard]," El Dorado County Undersheriff Fred Kollar told reporters.

The girls, now 11 and 15, had been living with their mother, now 29, in a series of sheds behind Phillip Garrido's house in Antioch, California, until they were discovered on Wednesday, Kollar said.

"None of the children had ever gone to school, they had never been to a doctor, they were kept in complete isolation in this compound, if you will, at the rear of the house," he said. "They were born there."

In a rambling telephone interview from jail, Garrido told CNN affiliate KCRA of Sacramento he was relieved at being caught.

"I feel much better now," he said. "This is a process that needed to take place."

Kollar said Garrido's wife, Nancy, was with her husband when Dugard was abducted from the street in front of her house in South Lake Tahoe. Garrido was already a registered sex offender at the time.

Watch police talk about why they arrested Garrido »

"There was nothing then nor is there anything now to indicate that this was anything other than a stranger abduction of an 11-year-old," Kollar said.

The investigation went years without apparent progress until Tuesday, when Garrido showed up on the campus of the University of California at Berkeley with his two daughters and attempted to get permission to hand out literature and speak, Kollar said. He did not know the subject of either the literature or the planned talk.

Police officers "thought the interaction between the older male and the two young females was rather suspicious," so she confronted them and performed a background check on him, Kollar said.

That check revealed that Garrido was on federal parole for a 1971 conviction for rape and kidnapping, for which he had served time in the federal penitentiary at Leavenworth, Kansas.

A school spokesman identified the officers as Allison Jacobs and Lisa Campbell, and said the two became suspicious of "subtle behavior" Garrido exhibited.

They passed on the information to Garrido's parole officer, who requested that the 58-year-old man appear Wednesday at the parole office.

Garrido did just that, accompanied by his wife, Nancy, "and a female named Allissa," Kollar said.

The presence of "Allissa" and the two children surprised the parole officer, who had never seen them during visits to Garrido's house, Kollar said.

DNA confirmation is being sought to confirm her identity, but Dugard revealed information during an interview that only she could have known, Kollar said.

"The two minor children turned out to be children of Jaycee and the male suspect, Garrido," he said.

Scott Kernan, undersecretary of the California Department of Corrections and Rehabilitation, told reporters that Garrido admitted to having abducted Dugard.

El Dorado County Sheriff's Office online records showed that Phillip and Nancy Garrido were in the county jail, held on suspicion of offenses including conspiracy to commit a crime and kidnapping with the intent to commit robbery and rape.

Dugard had been living behind Garrido's home since she was kidnapped, Kollar said.

But her presence there apparently went unnoticed by others in the residential neighborhood, where homes on one-fourth to one-half-acre lots typically sell for less than $200,000, said Kathy Russo, whose father has lived two houses away from the Garridos for 33 years.

"My dad said he never saw a young woman," said Russo, who added that her father, 94-year-old Dante Confetti, considered Garrido to be a "kind of strange, reclusive, kind of an angry kind of guy."

She said the one-story house's backyard was obscured by trees and ringed by a wooden fence.

Her family's last contact with Garrido was last fall, she said. "He was burning something in the backyard and my home health aide called the fire department," Russo said.

"He was really pissed off," she said. "Came over to the house and started yelling."

Garrido told KCRA that he left documents three days ago with the FBI in San Francisco, California, that would shed light on the case. "They're going to be a part of the trial," he said.

A call from CNN to the FBI's San Francisco bureau was not immediately returned.

Garrido said he could not go into detail about why he chose to abduct Dugard. "I haven't talked to a lawyer yet, so I can't do that," he said.

He added, "Wait 'til you hear the story of what took place at this house. You're going to be absolutely impressed. It's a disgusting thing that took place with me in the beginning, but I turned my life completely around."

Describing the two daughters, he said, "Those two girls slept in my arms every single night from birth; I never kissed them."

But in a later comment, he said that, from the time the youngest was born, "everything turned around."

Asked about the fact that they had not seen doctors, he said, "We just didn't have the finances and so forth."

Kollar said a search of Garrido's property "revealed a hidden backyard within a backyard," he said. It included several sheds no higher than 6 feet tall, two tents and several outbuildings "where Jaycee and the girls spent most of their lives."

The "secondary" backyard was inside the first and was "screened from view." One of the sheds was soundproof, he said.

At the end of the backyard is a 6-foot fence lined with shrubs, tall trees, garbage bags and a tarp, all of which obscured views of what was there, he said.

Extension cords provided electricity to the sheds and tents, and an outhouse and rudimentary shower "as if you were camping" were there, too, he said.

Dugard "was in good health, but living in a backyard for the past 18 years does take its toll," Kollar said. He described her as "relatively cooperative, relatively forthcoming" in discussions with detectives. He said Dugard was "in relatively good condition," neither obviously abused nor malnourished. He added, "There are no known attempts by her to outreach to anybody."

The mother and her two daughters were staying at a motel in the area, he said. "Family reunification has begun and will be a long and ongoing process," he said, presumably referring to Dugard's parents.

Earlier Thursday, Carl Probyn, Dugard's stepfather, told CNN that an FBI agent had called his wife, Terry, on Wednesday afternoon to tell her that Dugard had been found.

"Jaycee remembers everything," he said. "They talked back and forth and she had the right answers to all my wife's questions."

He witnessed the abduction of the blond, blue-eyed girl, who was wearing a pink windbreaker and pink stretch pants as she walked to her bus stop on June 10, 1991.

Watch the stepfather describe finding out Jaycee is alive »

At the time, "It was reported that a vehicle occupied by two individuals drove up to Jaycee Dugard and abducted her in view of her stepfather," the El Dorado County Sheriff's office said Thursday.

Ernie Allen, president of the National Center for Missing and Exploited Children, said the reappearance of Dugard is "absolutely huge."

"One of the things that we preach to searching families all the time ... is that even in these long-term cases there's hope," he said.

"Even in these long-term cases ... it's important that we not let the world forget."

All About Missing Children • California