(CNN) -- Heather Moores and her 4-year-old son, Julian, sat in a waiting room at a pediatrician's office. 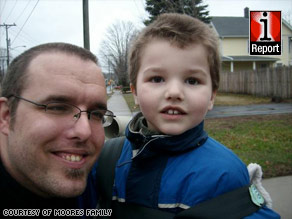 Julian, who has autism, was goose-stepping and counting every coat hook on the wall aloud. He started roaring like a lion. Moores smiled at her son, then noticed the horrified looks on other people's faces.

"People do not understand," she said. "To them, as bizarre as his actions might look, for us, they're a blessing. For us, it means he's enjoying himself and happy. No one understands that. They just see an out-of-control child. They don't understand this is a good day, when there isn't screams upon screams."

On the second World Autism Awareness Day, the search for a cure continues, and major court decisions have helped sort out the theories connected to the mysterious developmental disorders. Public knowledge and acceptance of autism and the difficulties the families face may be growing, as some iReporters told CNN.

But that's little comfort to a parent whose child's behavior can range from quirky to violent.

Jenny McCarthy and Jim Carrey get serious about autism. Questions and answers about vaccines from experts on both sides.
Friday, 9 p.m. ET

Children with autism have unexplainable breakdowns -- their outbursts are often loud, aggressive and disturbing. Julian slams himself against the ground or wall while he screams, flailing his limbs. Julian's younger brother, Marcus, 3, squirms away from his parents and runs into the street to oncoming cars because he is fascinated by them. He also screams with such ferocity that his face turns purple and mucus bubbles from his nostrils. Their youngest brother, Aric, also has autism and just turned 1 year old.

Photo gallery from iReporters about autism. »

Heather Moores remembers that the stares in the waiting room were full of contempt. Onlookers shook their head in disgust and glared, making her feel like the "world's worst mother." This happens every time they go out to the doctor's office, the barber shop or anywhere in public.

"You'll hear people talking, 'If it was my kid, he wouldn't behave like that. These parents don't know how to discipline their children. Why don't you shut that kid up?' said Alexandre Moores, Heather's husband. "It makes going out unpleasant. I don't know if you ever get used to it."

Autism spectrum disorders affect the ability to communicate and interact. Many with autism have repetitive movements like rocking or hand-flapping and become set in their daily routines. Anything unexpected -- even a sound -- can result in major meltdowns.

"The reason why toddlers have tantrums is they don't have verbal or cognitive skills yet," said Dr. Lisa Shulman, an associate clinical professor of pediatrics at the Albert Einstein College of Medicine in Bronx, New York. "They have no control to navigate difficult situations using their social and communication skills. That inability to communicate can set off such behaviors in toddlers."

Their odd behavior draws unwanted attention. Marcus walks on his tiptoes and amuses himself by dumping liquid from sippy cups and containers. Julian counts everything aloud, over and over again.

"People are always staring and because the children don't show any type of physical abnormality, like someone with Down syndrome would show; people kind of assume that you're a bad parent," said Alexandre Moores

When the staring and critical comments become too overwhelming, Julian's mother tells the onlookers that the children have autism.

"You're in a situation you have to explain your kids, because you can't take the looks," she said. "It gets really, really hard. No one seems to understand where you're coming from." Read Moores' iReport submission.

To prepare for outings, parents should bring a favorite toy or plan ahead to reduce waiting time. But don't avoid going out, Shulman said.

Parents should have a pat answer to say to a nasty face maker, she said. "It should be something they feel comfortable with, about this invisible disorder. 'This is what autism looks like. My child has disability.' They're not obliged to engage in conversation. Make a statement that's heard and move on."

Moores said the most helpful thing the public can do is withhold the judgmental looks and reassure the parent with a smile when they encounter a child having a public meltdown. Critical comments are "very, very painful and very depressing," she said.

"Please try to understand parents of special children are going through living hell 24 hours a day," she said. "Even if you are confused and you don't know what to do, give that parent a reassuring smile. That's the absolute best thing you could do."

It's a familiar experience for Laura Shumaker who remembered the scorn of strangers whenever her son had a public meltdown. Autism was not well-known when her son, Matthew, now 22, was growing up.

"When I look back, there are people who judged me," she said. "There were just as many that were compassionate, who could see I was trying my best."

Four years ago, she and her son were flying home to Northern California from Philadelphia, Pennsylvania. At the airport, Matthew learned they would be flying on US Airways instead of their usual United Airlines.

Shumaker walked to the U.S. Airway ticket counter as Matthew rocked behind her nervously, mumbling, "United is friendly. US Air is not."

Under her breath, Shumaker whispered to the ticketing agent that Matthew had autism. Then in a louder voice, she said, "We'd just like to trade these in for United tickets," and winked.

The agent paused for a moment, glanced at Matthew and said: "Oh! Well, don't worry, because US Air and United are the same now...really. We merged. We're the same airline now."

Strangers in line chimed in. "That's right," said a man standing behind them in line. "And the skies are still friendly."

"So many children are diagnosed, there is an awareness now," she said.

But it's still difficult to explain to others, Shumaker said, when Matthew comments at the supermarket that a person standing in front of them at the check-out line is too fat to buy ice cream.

All About Autism • Parenting