WASHINGTON (CNN) -- Seventeen-year-old women should be able to buy the "morning-after pill" without a prescription within a few weeks, a government spokesman said Thursday. 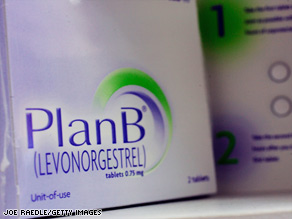 Plan B, also called the morning-after pill, is intended to prevent pregnancy after unprotected sex.

The Food and Drug Administration announced Wednesday that the contraceptive will be available over the counter to 17-year-olds, as it currently is for women 18 and older.

Agency spokesman George Strait said Thursday the approval process for the change will not take long. "It's likely to be weeks, rather than months or years before it's approved," he said.

The FDA just needs to review the label changes from the drug's maker, Duramed, Strait said. Once that's done, the approval will be complete.

On March 23, a federal court ordered that Plan B, an emergency contraception pill, be made available over the counter to those 17 and older, the agency said in a statement on its Web site. The agency will not appeal that order, the statement said.

In the order, U.S. District Judge Edward Korman also asked the agency to consider whether the pill should be available to women of all ages without a prescription, saying that such a determination is best left to the expertise of the FDA rather than a federal district judge.

Watch more on the Plan B controversy »

And he rebuked the FDA for apparently departing from its own procedures with respect to making decisions on the pill's over-the-counter status, noting the "unusual involvement of the White House in the Plan B decision-making process."

The plaintiffs in the case presented "unrebutted evidence of the FDA's lack of good faith" toward the application to switch Plan B from prescription to non-prescription use, the judge wrote.

"This lack of good faith is evidenced by, among other things, (1) repeated and unreasonable delays, pressure emanating from the White House, and the obvious connection between the confirmation process of two FDA commissioners and the timing of the FDA's decisions; and (2) significant departures from the FDA's normal procedures and policies ... as compared to the review of other switch applications in the past 10 years," Korman wrote.

But, the agency said in Wednesday's statement, "in accordance with the court's order, and consistent with the scientific findings since 2005 by the Center for Drug Evaluation and Research, FDA sent a letter to the manufacturer of Plan B that the company may, upon submission and approval of an appropriate application, market Plan B without a prescription to women 17 years of age and older."

"No useful purpose would be served by continuing to deprive 17-year-olds access to Plan B without a prescription," Korman wrote in his order. "Indeed, the record shows that FDA officials and staff both agreed that 17-year-olds can use Plan B safely without a prescription. The FDA's justification for this age restriction, that pharmacists would be unable to enforce the prescription requirement if the cutoff were age 17, rather than 18, lacks all credibility."

Planned Parenthood Federation of America President Cecile Richards said in a statement that the FDA's announcement is "a strong statement to American women that their health comes before politics. And that's the way it should be. This decision is common-sense policy that will help reduce the number of unintended pregnancies and protect the health and safety of all women."

The morning-after pill -- made by Duramed, a subsidiary of Barr Pharmaceuticals -- is intended to prevent pregnancy after unprotected sex. It works by stopping ovulation and decreasing the chances that a fertilized egg will attach to the uterus. When used within 72 hours of unprotected sex, it can lower the risk of pregnancy by almost 90 percent, the maker says.

Some critics charge that the drug's action amounts to an abortion, and opposed making it available over the counter. Others expressed health concerns.

"Plan B is a high dose of birth control pills. ... The FDA violated its standards when it made the high-dose Plan B available nonprescription to adults. But now the FDA is making the drug available to minors without parental consent," the Concerned Women for America, a Washington-based conservative Christian group, said Wednesday.

"Parents should be furious that the FDA is putting their minor daughters at risk," the group said.

All About Food and Drug Administration • Plan B Contraceptive