(CNN) -- A potentially deadly new strain of the swine flu virus cropped up in more places in the United States and Mexico on Saturday, in what the World Health Organization called "a public health emergency of international concern." 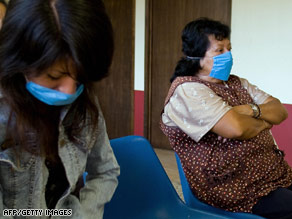 The most recent reports Saturday afternoon were of two confirmed cases of the virus in Kansas -- bringing the number of confirmed U.S. cases to 11.

Those joined nine confirmed cases in Texas and California and an apparent outbreak at a private school in New York City, where officials say eight children likely have the virus.

By Saturday night, health officials in Mexico said 81 deaths there were "likely linked" to the swine flu.

President Felipe Calderon on Saturday issued an executive decree detailing emergency powers of the Ministry of Health, according to the president's office.

The order gives the ministry with the authority to isolate sick patients, inspect travelers' luggage and their vehicles and conduct house inspections, the statement said.

The government also has the authority to prevent public gatherings, shut down public venues and regulate air, sea and overland travel.

The WHO's Gregory Hartl said the strain of the virus seen in Mexico is worrisome because it has mutated from older strains.

"Any time that there is a virus which changes ... it means perhaps the immunities the human body has built up to dealing with influenza might not be adjusted well enough to dealing with this new virus," Hartl told CNN.

In Mexico, otherwise young and healthy people have been hit by the virus -- "one of the pieces of the puzzle that is worrying us," he said.

Mexico City has closed all of its schools and universities because of the virus, and the country's National Health Council said all Saturday's soccer games would be played without public audiences.

WHO has sent experts to Mexico at the request of the country's government, Chan said.

All of the U.S. patients have recovered or are expected to. Two of the border cases were in Texas, near San Antonio, and seven of the cases were in southern California, the CDC said.

Watch for more on the U.S. cases »

More than 1,300 people with flu-like symptoms have been admitted to hospitals in Mexico, and officials are trying to determine how many of those patients have swine flu, the country's health minister, Cordova said.

U.S. health officials said Friday that some cases of the virus matched samples of the deadly Mexican virus.

On Saturday, New York's Bureau of Communicable Diseases said preliminary tests from a Queens school suggest that eight out of the nine children tested probably have the swine flu virus.

Dr. Don Weiss said up to 200 students at the school reported feeling ill.

He said the samples will be sent to the CDC in Atlanta, Georgia, to determine the subtype of the strain. The results could be known as early as Sunday.

"What's concerning about this is, first, that it's likely swine flu; second is that at this time it is spreading from person to person," said New York City health Commissioner Thomas Frieden.

When the flu spreads person to person, instead of from animals to humans, it can continue to mutate, making it a tougher strain that is harder to treat or fight off.

The infected people in Kansas are a man who had recently traveled to Mexico and his wife, officials said. Neither of them was hospitalized, said Dr. Jason Eberhart-Phillips, director of the Kansas Department of Health and Environment.

The United States had not issued any travel warnings or quarantines by Saturday evening.

Besser advised people with flu-like symptoms to stay home from work or school and to see a doctor.