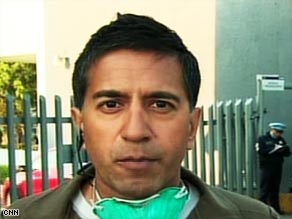 CNN: We got a question that comes to us over Twitter. This question, "I heard that you can't contract swine flu from eating pork. Is that true? If so, why? Does cooking or curing pork destroy the virus?"

Gupta: It is true. You cannot catch it from eating the pork. And it is true that cooking it to a certain temperature, around 160 degrees, also inactivates most of the pathogens in the pork as well. Follow Gupta on Twitter for swine flu updates

CNN: Another question that we have we haven't gotten to, actually, which is an important question, also on Twitter. "If a person has had the flu shot this year, is he or she protected? Does this person have a better chance of getting it, or would it just be a milder case?" Thank you.

That's from John Martin in Rome, New York. So what's the answer, doc?

Watch Gupta on the outbreak in Mexico »

CNN's Dr. Sanjay Gupta reports from Mexico on the spread, treatment and prevention of the swine flu.
Tonight, 10 ET

Gupta: Well, it doesn't appear that the flu shot really offers much in the way of protection, although it may offer some, and here's why.

This particular virus seems to be a combination of several different strains: two strains of swine flu, one strain of bird flu and one strain of human flu. It's the human flu that that flu shot may protect slightly against. So you're protecting against a part of the virus if that makes any sense.

But it's a very good idea to get your flu shot, for sure. Always think about that. But in terms of protecting for swine flu, it's not going to be enough.

CNN: We've got another question ... via Twitter this morning. And this is a question, of course, everybody is wanting to know the answer to: "Could this strain get out of control and mutate into something similar to the 1918 pandemic?" iReport: Are you worried about swine flu?

Gupta: Well, when you look at pandemics, they have several different qualities. They're usually a virus or some sort of pathogen the world has never seen before. They cause a lot of death, and they're sustainable in populations. We know that this is a new virus.

It is very hard to figure out just how deadly this is yet. We know that over 100 people have died here in Mexico, but we don't know out of how many people who got sick. There are about 1,300 people who had serious illness, but there may be thousands more who had mild illness who never went to the hospital. So it's hard to tell how lethal this is.

So, you know, on one hand, in 1918, you didn't have global air travel. Nowadays, you do. So this virus can move around the world a lot faster. But right now, it doesn't seem like it's as lethal. You know, it's just early in this whole process to be able to tell.

CNN: Sanjay, one question that we haven't gotten to ... most of the people who died from swine flu in Mexico were in the prime of their lives really, and this usually hits infants or the elderly. What does that say to you as a doctor?

Think about it like this: Typically, you think of someone who has a weakened immune system, who's going to be most adversely affected by an infection. Their immune system simply can't fight it.

But in these cases, it's the immune system itself that reacts robustly, and it's the immune system in that reaction to the virus that is causing death in these patients. So the virus starts that cascade, but all that fluid builds up in the lungs, and all those inflammatory cells throughout the body -- that's what's causing the problem. We saw the same thing with SARS and with avian flu as well.

Which is why exactly as you said ... [people in their] 20s and 30s and 40s, this hospital behind me, they say that's been the bulk of their patients with regard to swine flu.

CNN: You know, Sanjay, everybody knows that you're the sort of doctor that gets out there in the thick of things whenever something happens around the world -- any kind of public health emergency or disaster. And you're there in Mexico City, and a lot of people at home might be thinking, why the heck would Dr. Gupta want to go to a place where there's disease outbreak. What are you doing to protect yourself?

Gupta: Well, we are trying to -- you know, we're clearly being very cautious here. We're not taking any chances. These masks can be helpful. But, you know, this is going to sound simple, but simply washing our hands. This is a virus that lives on keyboards, lives on money. We don't shake hands with people. That's the way it's probably being spread, and that's what we're trying to avoid.

[Get more questions answered about swine flu by clicking here.]