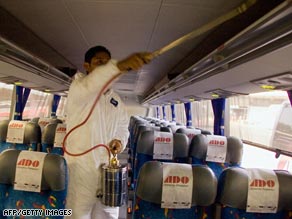 A masked worker disinfects a bus in Mexico City as new cases are reported in the country.

On Wednesday, the outbreak grew in terms of confirmed cases, people killed and countries with infections.

Health officials are scrambling to get more information about the virus for which there is no vaccine.

She added: "We do not have all the answers right now but we will get them."

Earlier, Dr. Anthony Fauci, director of the U.S. National Institute of Allergy and Infectious Diseases, said: "It's a virus that we've never seen before. There's no background immunity in the population and it is spreading from human to human, all of which has the potential for a pandemic." iReport.com: Do you think we should be worried about swine flu?

Germany and Austria became the latest European countries to report swine flu on Wednesday, while the number of cases increased in the United Kingdom and Spain.

The virus spread to five more U.S. states, and the number of people in the United States infected with the 2009 H1N1 influenza strain grew to 91, the Centers for Disease Control reported on Wednesday.

That number includes the country's first swine flu fatality: a 22-month-old child from Mexico who died of the illness at a Houston, Texas hospital on Monday.

President Barack Obama called on schools in the United States with confirmed or possible swine flu cases to "strongly consider temporarily closing so that we can be as safe as possible."

In Mexico, where the outbreak originated, health officials suspect the swine flu outbreak has caused more than 159 deaths and roughly 2,500 illnesses. So far, 26 cases -- including the seven deaths -- have been confirmed.

More than 2,700 other patients worldwide are believed to be suffering from the virus.

"It's clear that the virus is spreading, and we don't see it slowing down at this point," said Dr. Keiji Fukuda, assistant director-general of WHO, at a news conference.

"Flu is a very serious infection and each virus is unique, and so it's hard to know what we're going to be seeing," Besser said. "But given what we've seen in Mexico we have expected that we would see more severe infections and we would see deaths."

In Phase 1 no viruses among animals reported to have caused infections in humans.

In Phase 2 animal flu virus is known to have caused infection in humans and is potential pandemic threat.

In Phase 3, animal or human-animal flu virus has caused small number of cases in people, but not sufficient for community-level outbreaks.

Phase 4 is characterized by verified human-to-human transmission of animal or human-animal flu virus, indicating greater but not inevitable risk of pandemic.

Phase 5 means human-to-human spread of virus is confirmed in two countries in one WHO region and pandemic is feared imminent.

Phase 6 characterized by community-level outbreaks in at least one other country in second WHO region. This phase indicates global pandemic is under way.

The United States is taking precautionary measures to stem the spread of the disease, of which most cases are not severe.

U.S. Homeland Security Secretary Janet Napolitano said Wednesday that the federal government would be releasing nearly 13 million doses of antiviral medications to try to stem the spread of the virus.

Health officials stress the medications are only effective if taken in the early stages of the infection.

In the meantime, scientists are working on developing a vaccine with hopes of having a pilot version ready for testing in a few months, Fauci said.

In Mexico City, however, there is a shortage of antiviral medication. And it became impossible to find protective surgical masks, which the government had handed out to one out of every five residents.

Mexican authorities believe they may have found "patient zero" in the global outbreak in the small village of La Gloria in the mountains of Mexico.

Five-year-old Edgar Hernandez -- known as "patient zero" by his doctors -- survived the earliest documented case of swine flu in the current outbreak. He lives near a pig farm, though experts have not established a connection between that and his illness.

Edgar has managed to bounce back from his symptoms and playfully credits ice cream for helping him feel better.

Researchers do not know how the virus is jumping relatively easily from person to person, or why it's affecting what should be society's healthiest demographic. Many of the victims who have died in Mexico have been young and otherwise healthy.

The deadly outbreak in Mexico has prompted authorities to order about 35,000 public venues in Mexico City to shut down or serve only take-out meals as health officials tried to contain spreading of the virus.

Governments around the world are scrambling to prevent further outbreak. Read what steps countries are taking

Some, such as China and Russia, have banned pork imports from the United States and Mexico, though the World Health Organization says the disease is not transmitted through eating or preparing pig meat.

Several others countries, such as Japan and Indonesia, are using thermographic devices to test the temperature of passengers arriving from Mexico.

Swine influenza, or flu, is a contagious respiratory disease that affects pigs.

When the flu spreads person-to-person, instead of from animals to humans, it can continue to mutate, making it harder to treat or fight, because people have no natural immunity.

All About Mexico • Influenza • Spain