(CNN) -- Both people who died of swine flu in the United States had pre-existing health problems, federal health authorities said Thursday in a report. 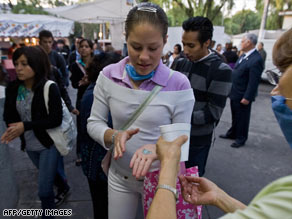 A student uses disinfectant as she arrives Thursday at the National Technical Institute in Mexico City.

The 22-month-old child who died April 27 of the flu, also called H1N1, had neonatal myasthenia gravis, an autoimmune disease, said the report, which was written by a virus investigation team at the Centers for Disease Control and Prevention and published online in the New England Journal of Medicine. The child -- who was from Mexico and who fell ill while visiting relatives in Texas -- also had a heart defect, problems swallowing and chronic hypoxia, the report said.

The 33-year-old Texas woman who died last week was pregnant when she became ill, the article said. She had been diagnosed with asthma, rheumatoid arthritis and psoriasis.

The details came in a summary of the 642 confirmed cases of H1N1 infection that were diagnosed between April 15 and May 5 in 41 states among patients ranging in age from 3 months to 81 years.

Sixty percent were 18 years or younger and 18 percent had recently traveled to Mexico, the report said.

It said that 36 of the 399 patients with confirmed H1N1 infection whose hospitalization status was known had been hospitalized.

Of the 22 hospitalized patients for whom data were available, four were younger than 5.

Nine had chronic medical conditions, some of which included Down Syndrome and congenital heart disease.

Seven patients said they had traveled to Mexico during the week before onset of illness.

Eleven of those 22 hospitalized patients had pneumonia and eight patients were treated in an intensive care unit. Four were placed on ventilators.

As of Tuesday, 18 of the 22 patients who had been hospitalized had recovered, it said.

In a conference call with reporters, CDC's Dr. Carolyn Bridges said epidemiologists would be scrutinizing the disease's spread in South America, where the cool season is set to begin.

Flu virus "prefers lower humidity and lower temperatures for transmission," she said. "We'll be looking closely to the Southern Hemisphere during their winter to see what happens. That may give us some clues as to what to expect."

Three have been hospitalized and one is at home, said Health Minister Jose Gomes Temporao. One case is in Rio de Janeiro, two are in Sao Paolo and the fourth was in Minas Gerais in southeastern Brazil. Two of the patients had recently been in Mexico City; the other two had recently been in Florida, he said.

Another 21 cases are suspected in Brazil, he said.

In Buenos Aires, Health Minister Graciela Ocana confirmed Argentina's first H1N1 case -- a man who arrived April 25 from Mexico. The man was hospitalized in the capital and released after he recovered, Ocana said.

The ultimate course of the disease remains unclear, said Dr. Anthony Fauci, director of the National Institute of Allergy and Infectious Diseases, who is involved in the effort to create a vaccine.

"We may be seeing the tip of the iceberg," he told CNN. "We can't make any definitive projections about where this is going. It appears to be acting like a typical seasonal flu, only it's out of season. We shouldn't be seeing this much influenza and it's with a new virus and that's the cause fo the concern."

Asked when a vaccine might be available, he said, "We hope to get doses by mid- to late fall."

All About Swine Flu • Mexico