SEOUL, Korea (CNN) -- Researchers at a South Korean university say they have discovered a candidate strain for an H1N1 vaccine, though it has not yet been approved by health authorities in the United States or the World Health Organization. 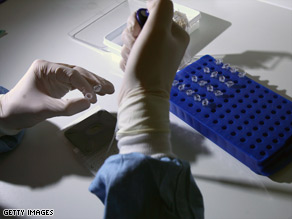 Researchers around the world are racing to come up with a vaccine for the widespread H1N1 virus.

The strain is a genetically modified version of a live virus, and could lead to a vaccine against H1N1 -- commonly known as swine flu, said Seo Sang-heui, a professor at Chungnam National University's College of Veterinary Medicine in South Korea.

"We created a candidate strain," Seo told CNN on Wednesday. The strain would still have to undergo additional testing and tweaking, but Seo believes it could be the right one to develop a vaccine.

He said the university is sending eight vials of the strain to the U.S. Centers for Disease Control and Prevention. Seo added that the CDC had sent the university an original strain of the virus for testing.

CDC spokesman Dave Daigle told CNN said the agency has sent H1N1 strains to roughly 10 labs around the world, but he had no information on South Korea's claims. He said the CDC would check out the university's research.

Researchers around the world are racing to come up with a vaccine for the widespread virus, but the CDC and the WHO have said it could take up to six months between the time a virus appears to the time the vaccine is available to the public.

Earlier this month, WHO officials said candidate vaccine strains would undergo quality-control measures and be evaluated in clinical trials. If it meets certain criteria, a candidate vaccine would still have to be approved by the federal Food and Drug Administration before being available to patients in the United States.