Herbs, vitamins that can hurt you

(CNN) -- Carole Grant doesn't really trust medical doctors. She never has. Whenever she has had a health issue, she has headed straight for an herbalist, acupuncturist or other "natural" healer. 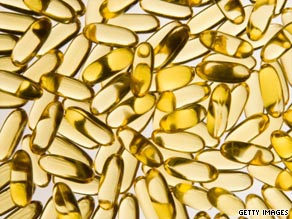 A few years ago, her alternative practitioner of choice was a self-described "intuitive healer" in New York, where she lives. The healer put Grant on a regimen of herbs, supplements and vitamins to help her lose weight.

A few weeks later, Grant, a geriatric care manager, was closing up an apartment for an elderly client who'd died when she started feeling strange sensations in her toes.

"They were tingling like crazy," Grant said. "I thought it was the carpet in the apartment, because it was old and dirty, and I'd taken my shoes off."

When the tingling in her toes spread to her feet, Grant knew that it was more than just the dingy carpet. When it spread to her legs, she knew that she was really in trouble.

"Both legs went numb up to my knees," she remembers.

Grant sought help from a podiatrist, who insisted that she get care from a medical doctor. Grant chose Dr. Roberta Lee, vice chairwoman of the Department of Integrative Medicine at the Beth Israel Medical Center in Manhattan.

After some testing, Lee discovered the reason for Grant's numbness: She had sky-high amounts of vitamin B6 in her blood, which can interfere with circulation.

"The intuitive healer had told me to double my dose of vitamin B6," Grant said. "She never told me when to stop the double dose, and I never checked with her."

It turned out the healer was having Grant take about 100 times the normal dose of B6, according to Lee. The healer had intended for Grant to take this high dose for a few weeks. Instead, she took it for more than four months.

"It blew my mind to think this could happen to someone like me," Grant said. "I'm so careful. I'll use every natural modality I can before taking medicine."

Lee says that although it's unusual, she's seen other patients get into trouble with herbs, supplements and vitamins precisely because they're less cautious with something that's natural than they would be with a drug.

"A lot of people think herbs are safe because they come from nature, and they are safe if used properly," Lee said. "But you can still get into trouble with them."

"I don't think any herb is good or bad. It's how we use it," said Dr. Brent Bauer, director of the Complementary and Integrative Medicine Program at the Mayo Clinic. "Sometimes people take too much. They think, if two is good, then 20 must be better."

Here's a list of herbs and supplements that can be dangerous if taken the wrong way: either in high doses, in combination with certain drugs or before surgery.

This herb, often taken to relieve depression, is always at the top of the list of potentially problematic natural remedies because it can cause serious side effects and increase or decrease the potency of many medications. The Mayo Clinic recommends that many people should avoid it, including those taking antidepressants, anti-blood-clotting drugs, certain asthma drugs, immune-suppressing medications or steroids.

A sedative herb, kava is associated with serious liver problems, even when taken for a very short time, according to the Mayo Clinic. It's especially risky if you're taking drugs to lower cholesterol.

Though it's a very safe supplement to increase your intake of heart-healthy fat, Lee says she's seen patients have excessive bleeding when taking high doses of fish oil. "It's not life-threatening, but for example, I've seen where people are taking too much fish oil, and they'll have prolonged bleeding from acupuncture needles."

Last week's Morbidity and Mortality Weekly Report, put out by the Centers for Disease Control and Prevention, details the case of a man who developed hepatitis after taking the herb artemisinin for stomach problems. There was no other reason for his hepatitis, and the disease went away when he stopped taking the herb, and the authors suggested that doctors be aware of a possible relationship between the artemisinin and hepatitis.

5. Various herbs when taken before surgery

Dr. David Rowe, a plastic surgeon, was operating on a patient when he noticed an unusual amount of bleeding.

"The tissue was just oozing, and we couldn't figure out why," he remembered, noting that the patient had told him he wasn't taking any supplements. "After the surgery I asked the patient, 'Are you sure you're not taking anything?' and he said, 'Oh, yes, I'm taking this, this and this.' "

In a paper published this year in the Aesthetic Surgery Journal, Rowe listed about a dozen herbs that should be avoided within two weeks of surgery, including common ones such as garlic, ginseng and echinacea. Some increase bleeding and some affect the heart, and others interfere with anesthesia or other drugs.

It's imperative that you tell your surgeon absolutely every natural remedy you're taking, says Rowe, an assistant professor of plastic surgery at University Hospitals Case Medical Center in Cleveland. Studies have shown that 60 to 70 percent of patients don't tell their physicians about supplements.

He tells his patients to read their supplement labels carefully.

"One supplement can have 10 or 15 things in it, so you may not know what you're on, which is really scary for us surgeons," he said.

As for Grant, she's still feeling tingling and numbness in her legs and feet even three years later.

"I still need to lose weight, but I'm not taking any supplements," she said. "I'm just too gun-shy at this point."

For more information about herbs, vitamins and supplements, visit the Web sites for the National Institutes of Health, the Food and Drug Administration and the Alternative Medicine Foundation.

All About Vitamins and Supplements