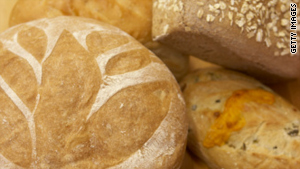 (Health.com) -- People who spend a full year on a strict low-carbohydrate diet can lose weight, but they might be happier -- and lose just as many pounds -- if they focus on reducing fat intake instead of carbohydrates, new research suggests.

Weight-loss strategies like Atkins and South Beach promote sharply cutting carb intake so that your body burns fat for energy. These diets are known as ketogenic plans because, in the absence of carbohydrates, the liver breaks down fat into fatty acids and substances known as ketone bodies.

Short-term studies have found that low-carb diets can have positive and negative effects on mental function and mood, but little is known about how the diet affects mood in the long run. Grant D. Brinkworth, of the Commonwealth Scientific and Industrial Research Association in Adelaide, Australia, and colleagues randomly assigned 106 obese and overweight people to either a low-fat or low-carbohydrate diet.

Eight weeks after starting the calorie-restricted diets (1,433 to 1,672 calories daily), the dieters felt happier than they did before the diet, whether they cut out carbs or reduced their fat intake. Psychological mood and well-being were measured with tests, and 24 percent of those on the low-carb diet were taking antidepressants when the study started, as were 12 percent of those on the low-fat diet.

Brinkworth and his team followed up with participants a year later. Those who stuck with their diet -- 65 people in all -- had lost an average of about 30 pounds, according to a report in the Archives of Internal Medicine.

However, mood improvements persisted only in the low-fat diet group. The low-carb dieters saw their moods worsen over time, but in most cases they were still better off than they were before starting the diet.

Health.com: 7 simple ways to be happier

People were also held to a strict calorie limit, unlike some low-carb approaches that allow people to eat as much as they want, provided they keep their carb intake to a minimum.

Health.com: Curb your hunger with running

Because people were consuming so much calorie-dense fat and protein, the actual volume of food they were eating was much smaller than what they were probably used to eating, notes Kristen D'Anci, of Tufts University in Medford, Massachusetts, who has studied diet and mood but wasn't involved in the current study.

This simple fact -- as well as the social isolation that can come with eating only turkey at Thanksgiving while others are enjoying pumpkin pie and stuffing -- goes a long way toward explaining why study participants on the low-carb diet felt worse over time. "I would be grouchy too," D'Anci says.

Meanwhile, people in the low-fat group didn't have to slash their intake in such an obvious way, she explains: "They're getting more to eat, and that makes people happy. This is the kind of thing where it doesn't disrupt your life so much."

A 2007 study by a different group of researchers showed that after 24 weeks, people on low-fat or low-carb diets both show improvements in mood, but the improvements are greater in the low-carb group.

Health.com: Why carbohydrates are so important in diabetes

Dr. Eric C. Westman, of the Lifestyle Medicine Clinic at Duke University Medical Center, in Durham, North Carolina, who helped conduct the 2007 research, says the two studies have one key difference -- in his study, people on a low-carbohydrate diet were allowed to eat as much as they wanted.

"The main difference between their methodology and our study methodology was that they restricted the amount that people could eat and we did not," Westman says. "That's an important thing to focus on because...if you're told you can't eat as much as you want, this may put some damper on the mood, so to speak."

Less extreme low-carb diets, in which people get about 30 percent of their calories from carbohydrates, can benefit people with diabetes and metabolic syndrome in terms of cutting cholesterol and improving their ability to process glucose in the body, according to D'Anci. However, the choice of diet depends on the individual. "What we always say is people should use what works for them," she adds.

Westman agrees. "If someone felt bad on a certain diet, I wouldn't keep them on it," he says.

Dr. Christy Boling Turer, a health services research fellow at the VA Medical Center, in Durham, North Carolina, notes that twice as many people in the low-carb group were being treated for depression at the beginning of the study.

That fact, as well as the high dropout rate, suggests "these data should be viewed cautiously," she says.