By Christine Romans and Jennifer Bragg
CNN's Your $$$$$

NEW YORK (CNN) -- Layoffs for sea lions? Furloughs for frogs? Is there no job security, anywhere? 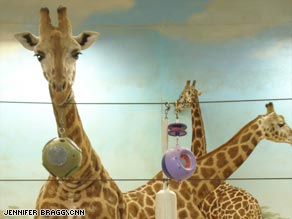 "We're faced with this very difficult problem of firing the animals, as it were," said Steve Sanderson, the CEO of the Wildlife Conservation Society, which manages the Bronx Zoo and the New York Aquarium. They will lose $3 million to budget cuts.

The Bronx Zoo has made a short video posted on its Web site www.bronxzoo.com/ to draw attention to the cuts. In the video, the zoo director fires a porcupine and a frog.

"I am sure you have heard that Gov. [David] Paterson's proposed budget will mean severe cuts here at the Bronx Zoo and the New York Aquarium," the zoo director says. "Next year, all 76 zoos, botanical gardens and aquariums in the state will lose all of their state funding. There is no easy way to say this: Even though you bring record numbers of people to New York and help the economy, we are going to have to let you go."

Firing a porcupine and a frog may be a cute way to get publicity for their budget woes, but it's a serious matter and zoo officials say the recession will certainly affect the animals.

We cut through the smoke screens and tell you how the news of the day affects you and your wallet.
Sat, 1 p.m. & Sun 3 p.m. ET

Zoo officials say some collections with "short life cycles" will not be replaced when they die, and other animals could be sent to other zoos or wildlife sanctuaries.

The state of New York funds just 2.7 percent of the Bronx Zoo and the New York Aquarium's budget, but zoo officials say it will be difficult to make up. Between the state budget cuts, the loss in the value of their endowment and fewer people renewing memberships -- times are so tough for the zoo and aquarium -- they say they may lay off 120 to 130 people.

"Two-thirds of our budget is people, and so two-thirds of the cuts will come in cutting positions," Sanderson said. "And we'll also cut back what we provide in the way of education and entertainment and nature experiences for people. So it affects everything."

Zoo officials questioned the state's priorities. But just about everybody getting taxpayer funds has to cut back.

Citing a "dramatic reduction in revenue," Gordon said, "Every entity that receives state funds must do what the state has done, which is to review its operations and identify ways to operate at lower costs."

The Bronx Zoo isn't the only one affected; cutbacks are happening everywhere. The Los Angeles Zoo in California stopped work on its $42 million elephant exhibit last year, and there are big budget cuts for zoos in Maryland, Missouri and North Carolina.

There's no relief for the zoos in the $819 billion economic stimulus package. Section 1109 of the stimulus bill which passed this week in the House forbids the use of federal taxpayer money to plug the budget gaps. Taxpayer watchdog groups lobbied to keep zoos, aquariums, swimming pools, golf courses and casinos out of the stimulus, arguing that there are higher priorities for Americans' money during a recession.

All About National Economy