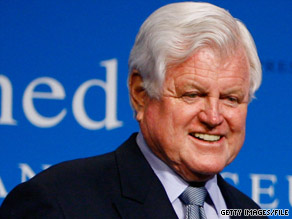 Sen. Ted Kennedy wanted to change a law to allow the appointment of a temporary replacement.

(CNN) -- It may be months before Edward Kennedy's Senate seat is filled, following his death at the age of 77 on Tuesday.

The seat may remain in Kennedy hands. His sons, Edward Kennedy Jr. and Rep. Patrick Kennedy of Rhode Island, have been mentioned as possible successors, as has his nephew, former Rep. Joseph P. Kennedy II.

Edward Kennedy's wife, Victoria Reggie Kennedy, has no interest in filling the seat, a source close to the senator said.

A long-term vacancy could have effects far beyond Kennedy's home state of Massachusetts, since his death deprives Democrats of the 60-vote "supermajority" with which they can theoretically force laws through the Senate despite Republican objections.

Under Massachusetts law, a special election must be held 145 to 160 days after a Senate seat becomes vacant. The winner of that election serves the remainder of a senator's unexpired term.

Just last week, Kennedy urged that the law be changed to allow the governor to appoint a temporary replacement until the special election can be held.

In a letter to Gov. Deval Patrick and other state leaders, Kennedy said he supports the current law, but added, "I also believe it is vital for [Massachusetts] to have two voices speaking for the needs of its citizens and two votes in the Senate during the approximately five months between a vacancy and an election."

Kennedy asked the governor and state leaders to "amend the law through the normal legislative process to provide for a temporary gubernatorial appointment until the special election occurs."

Patrick said Wednesday that he is in favor of the change and would sign it into law if the state legislature passed it.

He said Kennedy's proposal for an interim appointment until a special election was "entirely reasonable."

"I think particularly now, when you think about the momentous change legislation that is pending in the Congress today, Massachusetts needs two voices," Patrick said in an interview with Boston radio station WBUR.

Kennedy's letter is dated July 2 but was not sent until August 19 -- less than a week before he died.

Kennedy, who had been having conversations with several top state Democrats about a potential succession, was concerned that releasing the letter would disrupt intense and tumultuous Senate health care negotiations, a source close to the senator said.

Kennedy sent the letter when he did only because the Boston Globe newspaper learned about the discussions and was prepared to print what he thought was an inaccurate account of his efforts, according to that source and another person close to Kennedy. He decided to make his desires clear by delivering the letter, knowing it would go public.

Kennedy has championed universal health care for years and wanted to make sure Democrats have the votes they may need for passage of a comprehensive bill.

He called the issue "the cause of my life," and he hoped to see legislation that would "guarantee that every American will have decent, quality health care as a fundamental right," as he said at the 2008 Democratic Convention. iReport.com: Share tributes to Kennedy

Democrats -- who, in collaboration with independent Sens. Joe Lieberman of Connecticut and Bernie Sanders of Vermont, now control 59 of the 99 occupied seats in the 100-member Senate -- face a tough battle this fall on President Obama's health care reform package. They have been trying to calculate votes without Kennedy, who was unable to attend many sessions for months because of his illness.

Until 2004, Massachusetts law allowed the governor to appoint an immediate replacement in the event of a U.S. Senate vacancy. The heavily Democratic legislature changed the law, however, after Massachusetts Sen. John Kerry became the likely Democratic presidential nominee -- when Republican Mitt Romney was governor.

Critics charged the Democrats were trying to prevent Romney from replacing Kerry with a Republican in the event of a Kerry victory over President George W. Bush.

It is not clear who will replace Kennedy in the seat he had held since 1962. He died 15 months after being diagnosed with brain cancer.

His brother, the late President John F. Kennedy, had the seat for almost eight years before being elected to the White House in 1960.

Kennedy was last re-elected in November 2006. His term runs until January 2013.