LOS ANGELES, California (CNN) -- Phil Lesh is on the phone. 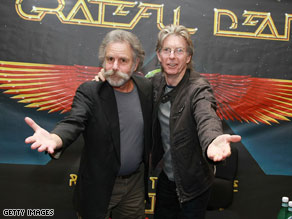 Bob Weir and Phil Lesh will be taking part in The Dead's April-May tour.

"I wish I could say I once quit my job to follow the Grateful Dead in my VW bus," I tell him. "But honestly, I'm just not that cool."

The bass player chuckles. "It's mostly trust-fund kids," he confides. "They're the only ones who are able to do that."

I guess you could say I'm a wannabe Deadhead. Like many Americans, I'm fascinated by tales of the Grateful Dead's improvisational live shows and colorful sense of community.

Some 40-odd years after the group rose out of San Francisco's Haight-Ashbury scene of the mid-1960s, there's even a popular Sirius Satellite Radio channel devoted solely to the legendary jam band.

A few days ago, the four surviving members of the Grateful Dead dropped a sweet New Year's gift on fans -- they'll reunite for their first concert tour in five years. Just as they did on their last outing, Lesh, guitarist Bob Weir and drummers Mickey Hart and Bill Kreutzmann will perform under the shortened moniker The Dead. It's a reverent nod to their iconic lead guitarist, Jerry Garcia, who died from a heart attack in 1995 after a long struggle with drug addiction.

Under the banner, "An Evening With," the trek will encompass 19 shows in 16 cities, kicking off April 12 in Greensboro, North Carolina, and wrapping up May 10 in Mountain View, California. The quartet will be joined by guitarist Warren Haynes and keyboardist Jeff Chimenti. iReport.com: Step back to the 1970s

The reunion is something that's been rumored since Lesh, Weir and Hart headlined a "Deadheads for Obama" concert in San Francisco last February. Kreutzmann was in Hawaii that night, but he was there in spirit. iReport: Are you grateful for a Dead tour?

"We've never, ever endorsed a candidate -- ever," Lesh states emphatically. "Not even Robert Kennedy. It was a big deal for all of us. But this was the time, and this was the man."

Accompanied by his wife, Jill, and their youngest son, Brian, Lesh even traveled to Reno to knock on doors, in an effort to get out the vote in Nevada -- a battleground state that ultimately went to Barack Obama. Did anyone recognize him when they answered the door? "Not really. Reno is not really a stronghold of Dead-dom," he deadpans.

Lesh downplays the band's legacy as founding fathers of a jam band scene that now includes such free-form artists as Phish, the String Cheese Incident and Blues Traveler. "All we did was steal what jazz musicians did and apply it to rock 'n' roll. If we didn't do it, someone else would have," he says.

For the tour, look for The Dead to continue their trademark three-and-a-half to four-hour shows (because of their marathon set, there's no time for an opening act). "We've been accused of being under-arranged. We've also been accused of noodling," says Lesh. "We make it different, make it new every night. We never play the same licks or the same fills twice. There is a set list -- more or less -- but Bobby, in particular, likes to stick things in." iReport.com: Spending time with Bob Weir poolside

The upcoming tour will feature mostly "Grateful Dead classics -- the things people like to hear," he says, so expect performances of "Truckin'," "Casey Jones," perhaps the band's sole Top 10 hit, "Touch of Grey," and maybe even the Holy Grail of Dead jams, "Dark Star."

Presale tickets go on sale January 13 -- and even though sold-out shows have been a way of life for The Dead, Lesh isn't taking their fan base for granted. "It's rough times. Of course it's an object of concern," he says. "All you can do is play the best music you can, and hope people can get out to hear it."
iReport.com: Colorful tie-dyes and painted buses are never out of style

All The Dead's members are in their 60s, with Lesh the elder statesman at 68. Two years ago, he underwent surgery for prostate cancer. "I'm pretty much recovered from that now. I eat right, exercise and work out with weights three days a week," he says.

He listens to jazz and classical music in his free time, and continues working on his side project, Phil Lesh and Friends. Two of his musical "friends" are his sons, Brian, a student at Princeton, and Grahame, who will be graduating from Stanford this year. Lesh hopes they'll make a guest appearance when The Dead hits their town -- if it doesn't interfere with their finals. iReport.com: Young fan sneaks out for rally show

When The Dead announced this tour, Bob Weir released a statement. "We've got some unfinished business," he said. Lesh goes a step further.

"We've got some unfinished music," Lesh clarifies. "We're all still evolving in our own ways. You can always improve your playing. Let's see what kind of a goulash we can make out of it. Besides," he adds, "I just got two new electric basses."

All About Jerry Garcia • The Grateful Dead