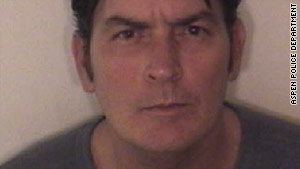 (CNN) -- Actor Charlie Sheen was released from a Colorado jail Friday after he was arrested on domestic-violence-related charges, Aspen police said.

Sheen, 44, was charged with second degree assault and menacing, both felonies, and criminal mischief, a misdemeanor, police said. Additionally, Colorado law mandates a protective order between someone arrested for domestic violence and the victim.

Police said the alleged victim, whom they did not identify, did not require a trip to a hospital.

Sheen was released from the Pitkin County Jail at 7 p.m. local time after posting $8,500 bond. He is scheduled to appear in court February 8.

His spokesman, Stan Rosenfield, cautioned against jumping to conclusions.

"Do not be misled by appearance," Rosenfield said. "Appearance and reality can be as different as night and day."

Sheen has been married to sometime actress and real estate investor Brooke Mueller Sheen, his third wife, since May 2008. The couple has twin sons born in March.

Sheen stars in the popular television comedy "Two and a Half Men" with Jon Cryer.

Sheen -- whose real name is Carlos Irwin Estevez -- is the son of actor Martin Sheen. He has two brothers and a sister -- Emilio, Ramon and Renee Estevez -- who are also actors.