(CNN) -- Scientists in Colombia have unearthed the remains of a true prehistoric monster believed to be the biggest snake ever to have lived on Earth. 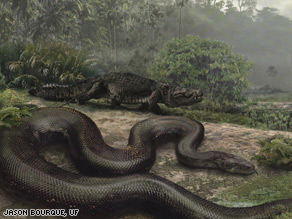 An artist's impression of what Titanoboa cerrejonensis would have looked like.

Named Titanoboa cerrejonensis, the snake would have weighed 1,140 kilograms (2,500 pounds) and measured 13 meters (42.7 feet) nose to tail tip -- dwarfing the largest modern pythons and anacondas which can grow to 6 meters (19.5 feet).

Scientists believe it slithered around the planet between 58 and 60 million years ago.

Geologist David Polly, who identified the position of the fossil vertebrae which made a size estimate possible, said in a statement Wednesday: "At its greatest width, the snake would have come up to about your hips. The size is pretty amazing.

"But our team went a step further and asked, how warm would the Earth have to be to support a body of this size?"

Titanoboa's fossilized remains were discovered at a coal mine in the tropical Cerrejon region of northern Colombia by an international team of scientists.

"The snake that tried to eat Jennifer Lopez in the movie 'Anaconda' was not as big as the one we found."

Based on the snake's size, the team was able to calculate that the mean annual temperature in equatorial South America 60 million years ago would have been about 91 degrees Fahrenheit, about 10 degrees warmer than today, Bloch said.

"Tropical ecosystems of South America were surprisingly different 60 million years ago," said Bloch. "It was a rainforest, like today, but it was even hotter and the cold-blooded reptiles were all substantially larger.

"The result was, among other things, the largest snakes the world has ever seen...and hopefully ever will."

According to Nature.com, snakes are poikilotherms (cold-blooded) that, unlike humans, need heat from their environment to power their metabolism. Therefore research suggests that at the time the region would have had to be no less than 86 to 93 degrees Fahrenheit for the snake to have survived.

Most large snakes today live in the tropical regions of South America and south-east Asia, where the high temperatures allow them to grow to impressive sizes.

Meanwhile, Carlos Jaramillo -- who was also part of the expedition -- said the tropical rainforest at Cerrejon appeared to have thrived at these temperatures.

"This data challenges the view that tropical vegetation lives near its climatic optimum, and it has profound implications in understanding the effect of current global warming on tropical plants," he said.

All About Colombia • Global Climate Change