Postal Service to pay less for homes to relocate workers

(CNN) -- The U.S. Postal Service will reduce the amount it pays for homes of employees who are relocating in the wake of a CNN investigation that found it was buying large homes for more than $1 million. 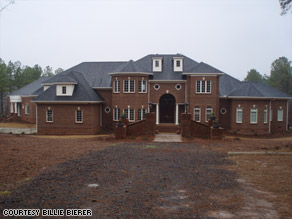 The Postal Service bought this 8,400-square-foot South Carolina home so an employee could relocate.

The new policy, which is expected to take effect June 14, will set a limit of $800,000 for a home. The limit is now $1 million, but before February there was no maximum.

In a statement to CNN, Postal Service spokesman Gerald J. McKiernan said, "It became apparent at the height of the real estate bubble that a number of relocations involved high value homes, thereby moving the Postal Service to reevaluate and change its policy."

A CNN investigation revealed in February that the Postal Service had no limit on the amount it would pay for a home of a relocating employee. It paid more than $1 million for 14 homes in the past five years.

Watch more on the house that $1.2 million bought »

The CNN investigation prompted Sen. Chuck Grassley to request a review of the relocation policy by the USPS inspector general's office. That review, completed this month, found that "while Postal Service relocations are generally comparable to other federal and private sector companies, the benefits it provides to relocating employees are very costly to the Postal Service."

The inspector general's report found that the Postal Service spent $73 million for relocation benefits to more than 2,000 employees last year.

"In our view, some of the relocations that occurred during this time period were exorbitant," the report states.

For example, the report cites a home in Indian River Shores, Florida, that was purchased by the Postal Service for $2.8 million in November 2007. The home was sold eight months later for $1.1 million, a $1.7 million loss.

"My reaction is that it's outrageous, particularly if you look at specific instances within that report, but overall surely it goes against what the Postal Service has recently been mandated to do, operate within their income, operate in a more businesslike, cost-effective way," Grassley said.

The report said that "underlying the high cost of relocating employees is the fact that the Postal Service does not limit the loss it will take on an employee's home sale."

McKiernan said the Postal Service relocation policy "is to enable highly qualified employees to relocate as quickly as possible to where they may provide the best use of their skills in support of the organization's goals."

He said in the statement to CNN that the Postal Service has purchased 2,646 homes in the past five years as part of the relocation assistance program. All have been resold.

The report found that Hopson received more than $75,000 in relocation benefits, including $16,075 for a house-hunting trip.

"We spoke directly with the relocating employee who told us that he and his wife indeed had traveled back and forth to Texas from South Carolina on house-hunting trips," the report states. "Consequently, this relocation appears to have been made in accordance with the policies and procedures in effect at the time of the relocation."

The report revealed that the home is now under contract for $950,000, which would mean the Postal Service would lose $250,000 if the sale goes through.

"He wanted to voluntarily move," Grassley said. "Nobody was making him move. They bought his house. They lost $250,000 on his house. So I think it gets to a point where they ought to make more efficient use of their personnel, and they wouldn't be wasting this $73 million."

Hopson, who is now the customer service manager for the USPS branch in Carrollton, Texas, has declined to discuss the sale, referring questions to the USPS media office.