WASECA, Minnesota (CNN) -- When you think of protection from the H1N1 flu virus, you may not think the hog population is what needs protecting. But that's precisely the concern among pork producers and those who use swine in research studies. 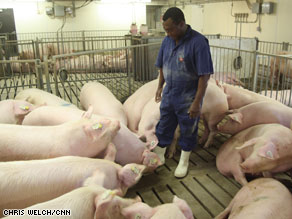 Professor Samuel Baidoo wears specially issued gear as he checks on the hogs at the research facility.

Forget any worries you may have had about catching the often-called "swine flu" from a pig. University of Minnesota Professor Samuel Baidoo, a swine nutrition and management expert at one of the school's swine research facilities, says it's actually the other way around.

"If we are sick and we come in here, we can easily transfer [diseases], especially flu, to these pigs," Baidoo says.

Baidoo took CNN on a tour of the university's research facility to demonstrate the precautions in place year-round to make sure its pig population remains safe.

For starters, anyone who wants to visit the facility has to shower and put on specially issued overalls and boots  and that rule applies to reporters and even the hog farmers themselves.

"They will shower to go and see their own pigs," Baidoo says.

This university's swine research barn is typical of most large-production hog facilities, Baidoo says, stressing that it's so secure "flies cannot even come in here."

"Flu can be transferred by flies, by birds. There's no way a bird can get into this building. So these pigs are very, very safe," he explains. "We are more a risk to them than they to us."

So let's say a pig does happen to come down with a disease, specifically with H1N1. Then what happens?

Baidoo says the first sign that something is wrong is usually lack of appetite.

"They go off feed, so we know there's something not right."

If it does turn out to be a flu virus, Baidoo says, the treatment is very similar to what humans undergo.

Baidoo points out that since H1N1 is a respiratory illness, the actual carcass of the pig -- the pork we eat -- is still harmless. Still, Baidoo says he understands the initial knee-jerk reaction. After all, "swine flu" was what everyone called it at first -- before health organizations began referring to it as H1N1.

"I also see the concern of consumers. When there is this situation everybody tends to connect the two. But there is no connection at all between the flu and pork," he says.

"There's no fear in eating pork based on the scare of the flu pandemic."

The disease most people in the United States and worldwide have been calling swine flu is actually a combination of human and animal strains. It has not been shown to be transmissible through eating pork.

In an already suffering market, the negative news is something the U.S. pork industry says could have been prevented.

"This flu is being called something that it isn't, and it's hurting our entire industry," Dave Warner, communications director for the National Pork Producers Council, said last week. "It is not a 'swine' flu, and people need to stop calling it that ... they're ruining people's lives."