MEXICO CITY, Mexico (CNN) -- Officials in Mexico's Chiapas state postponed classes Friday for more than 1 million students in an effort to avoid a resurgence of H1N1 flu, which has sickened thousands throughout Mexico this year. 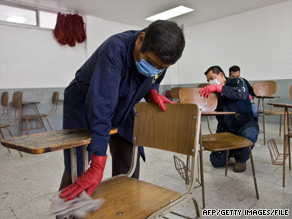 After the first confirmed swine flu reports in April, Mexico shut down all of its schools and many public venues.

About 1.55 million students will be affected, 850,000 of them in elementary school, Notimex said.

This is not the first instance of officials in Mexico altering schedules to combat the disease.

The first cases of H1N1, also called swine flu, were confirmed in Mexico in April. Within days, the government closed all schools and most public venues. In Mexico City, officials shut down all bars, theaters and public gathering places and limited restaurants to take-out orders. About 35,000 businesses were affected.

As of August 6, the WHO reported more than 177,450 confirmed cases in 170 nations. The Western Hemisphere has the most cases, with nearly 103,000 confirmed instances of the disease and almost 1,300 deaths. The WHO is no longer providing a country-by-country breakdown, but the United States, Argentina and Mexico have had the most cases and fatalities.

In the United States, federal officials released new guidelines this month for containing the spread of the virus across the nation's school system. Government officials have warned of a possible resurgence in the H1N1 virus this fall.

Among other things, health officials urged local administrators to exercise caution and restraint when deciding whether to close a school in response to an outbreak, noting that the costs of shutting down institutions often outweigh the benefits.

Officials also confirmed that a new vaccine to combat the virus is likely to be ready by October.

The virus has spread around the world with unprecedented speed, according to the WHO. Past influenza viruses have needed more than six months to spread as widely as the current H1N1 virus spread in less than six weeks, the WHO said.

All About Chiapas • Mexico • Swine Flu