WASHINGTON (CNN) -- A videotape of a heinous torture session is delaying the ratification of a civil nuclear deal between the United Arab Emirates and the United States, senior U.S. officials familiar with the case said. 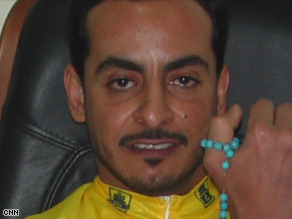 In the tape, an Afghan grain dealer is seen being tortured by a member of the royal family of Abu Dhabi, one of the UAE's seven emirates.

The senior U.S. officials said the administration has held off on the ratification process because it believes sensitivities over the story can hurt its passage. The tape emerged in a federal civil lawsuit filed in Houston, Texas, by Bassam Nabulsi, a U.S. citizen, against Sheikh Issa bin Zayed al Nahyan. Former business partners, the men had a falling out, in part over the tape. In a statement to CNN, the sheikh's U.S. attorney said Nabulsi is using the videotape to influence the court over a business dispute.

The civil nuclear agreement was signed in January between the United Arab Emirates and the Bush administration, but after the new administration took office, the deal had to be recertified. Secretary of State Hillary Clinton recently signed the document and sent it to President Obama for his signature. It should have reached Capitol Hill by now, the senior U.S. officials say, but Obama hasn't yet signed it. And officials say it deliberately has not yet been sent to Congress for ratification.

"It's being temporarily held up because of that tape," one senior official said.

Watch the tape that has sparked an investigation »

The senior U.S. officials say they are worried that lawmakers critical of the deal could use the videotape to undermine the agreement. The officials say lawmakers could argue the United States should not have such nuclear cooperation with a country where the rule of law is not respected and human rights violations are tolerated. Nabulsi's lawyer, Anthony Buzbee, told CNN he sent letters and excerpts of the tape to lawmakers.

The case reflects the complexities of U.S. foreign policy and may represent a test of the Obama administration's commitment to human rights as it marks its 100th day.

The State Department had little to say publicly on the torture tape incident, but its 2008 human rights report about the United Arab Emirates refers to "reports that a royal family member tortured a foreign national who had allegedly overcharged him in a grain deal." When asked about the case, Acting State Department spokesman Robert Wood said only, "We urge all governments to fully investigate allegations of criminal acts. "

On Wednesday, an Abu Dhabi government agency issued a statement deploring the video and promising a full investigation.

"The Government of Abu Dhabi unequivocally condemns the actions depicted on the video and will conduct a comprehensive review of the matter immediately," said the statement issued by the Judicial Department's Human Rights Office, which promised to make its findings public.

U.S. Rep. James McGovern -- the Massachusetts Democrat who co-chairs the congressional Human Rights Commission -- wrote Secretary Clinton expressing "outrage and concern" over the tape and asked her to take a "lead role" in investigating the case, including whether a Department of Homeland Security official working out of the U.S. Embassy in Abu Dhabi failed to bring the case to the attention higher ranking U.S. officials for action after being shown the tape by Nabulsi.

McGovern asked Clinton to "place a temporary hold on further U.S. expenditures of funds, training, sales or transfers of equipment or technology, including nuclear until a full review of this matter and its policy implications can be completed." He also asked that the United States deny any visa for travel to the United States by Sheikh Issa or his immediate family, including his 18 brothers, several of whom are ruling members of the UAE government.

In a phone interview with CNN, McGovern said the tape "should give everyone pause before moving forward with a nuclear cooperation deal until there is just resolution to this."

"How do you justify not only normal relations but providing military technology and a nuclear deal when impunity seems to be the way they do business," he said. "I think we have an obligation to say that we want to step back a bit and look at this a little more closely. If we have any credibility we need to stand firm even when it may be in terms of our geopolitical or strategic interest. This is brutal torture."

Under the "1-2-3 deal," similar to one the United States signed last year with India, Washington would share nuclear technology, expertise and fuel. In exchange, the UAE commits to abide by the Nuclear Non-proliferation Treaty and the International Atomic Energy Agency safeguards.

The small oil-rich Gulf nation promises not to enrich uranium or to reprocess spent nuclear fuel to extract plutonium, which can be used to make nuclear bombs.

The deal is part of a major UAE investment in nuclear, and it has already signed deals to build several nuclear power plants.

The United States already has similar nuclear cooperation agreements with Egypt and Morocco, and U.S. officials said Washington is working on similar pacts with Saudi Arabia, Bahrain and Jordan.

When the Bush administration signed the deal in January, it stressed the UAE's role in global nonproliferation initiatives, including a donation of $10 million to establish an International Atomic Energy Agency international fuel bank.

The United States has praised the UAE's development of nuclear energy, a stark contrast to criticism of Iran, which is suspected of attempting to enrich uranium for a nuclear bomb.

Congressional critics fear the deal could spark an arms race and proliferation in the region, and the UAE's ties to Iran also have caused concern.

Iran is among the UAE's largest trading partners. In the past, the port city of Dubai, one of the UAE's seven emirates, has been used as a transit point for sensitive technology bound for Iran.

Dubai was also one of the major hubs for the nuclear trafficking network run by Pakistani nuclear scientist Abdul Qadeer Khan, who admitted to spreading nuclear technology to Iran, North Korea and Libya up until the year 2000. He was eventually pardoned by the Pakistani government.

Such ties contributed to stiff opposition in Congress to the failed deal for Dubai Ports World to manage U.S. ports.

Officials said they expect the deal to be sent up to the Hill for ratification within the next few weeks, given that there has been little blowback from the publication of the tape, except for McGovern's letter to Clinton.

"It will be sent very soon," one official said.

UAE Ambassador to the U.S. Yousef Al Otaiba told CNN his government always expected the deal to be sent to the Senate in early May, regardless of the controversy surrounding the tape.

"As far as we are concerned, the deal is on track and this has not affected the timing," he said.

But McGovern told CNN he plans to hold hearings on the matter, including looking into allegations that more tapes depicting Sheikh Issa torturing victims exist.