BAGHDAD, Iraq (CNN) -- A U.S. soldier fired on his fellow troops at a counseling center at a base outside Baghdad, Iraq, on Monday, U.S. officials said, killing five people in the worst such attack of the six-year-old Iraq war. 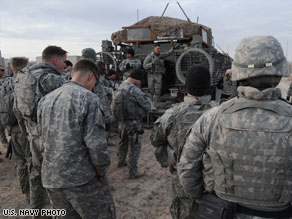 The shooting occurred at 2 p.m. at a stress clinic at Camp Liberty, near Baghdad International Airport, two senior defense officials said. Though initial reports indicated the attacker was killed in the incident, the U.S. command in Baghdad said late Monday a suspect in the killings was in custody.

Neither the suspect nor any of the victims had been identified, but a defense official with access to the latest reports on the incident told CNN that the suspect had been a patient at the treatment center.

"Any time we lose one of our own, it affects us all," Col. John Robinson, a U.S. military spokesman, said in a written statement.

President Obama said that he was "shocked and deeply saddened" by the "horrible tragedy."

"My heart goes out to the families and friends of all the service members involved," he said in a written statement. "I will press to ensure that we fully understand what led to this tragedy, and that we are doing everything we can to ensure that our men and women in uniform are protected."

The president said he discussed the issue in a meeting with Defense Secretary Robert Gates on Monday afternoon.

And Gates expressed his own "horror and deep regret" at a press briefing.

Watch the defense secretary talk about the incident »

"If the preliminary reports are confirmed, such a tragic loss of life at the hands of our own forces is a cause for great and urgent concern," Gates said. "And I can assure you that it will get this department's highest priority attention."

Adm. Michael Mullen, chairman of the Joint Chiefs of Staff, added the incident shows a need to "redouble" efforts regarding troop stress levels.

Camp Liberty is tightly guarded, and U.S. troops are required to clear their weapons of ammunition while on the base. The only service members who have loaded weapons are those guarding high-ranking officers and military police.

Monday's attack marks the sixth incident in which a service member was killed by a fellow service member since the launch of Operation Iraqi Freedom, the March 2003 invasion of Iraq.

Camp Liberty is part of the Camp Victory Complex, one of the largest U.S. military bases in Iraq. It lies just northeast of Baghdad International Airport and is also near the massive al-Faw palace of executed former dictator Saddam Hussein.

Once known as Camp Victory North, the base was renamed Camp Liberty in September 2004, or Camp Al-Tahreer in Arabic, according to GlobalSecurity.org, a Web site that provides background on military and security issues.

Like other American facilities in Iraq, Camp Liberty provides a host of amenities for the thousands of U.S. troops who call it home during their combat tours.

The base resembles a giant trailer park, dotted with air-conditioned two- or three-person units that house thousands of service members. It boasts several dining facilities catered by a private company, fully equipped gymnasiums, recreation centers and a post exchange that rivals Wal-Mart.

In recent years, a number of fast food restaurants such as Burger King and Pizza Hut have opened, as well as private stores and a bazaar that sells local wares.

The military set up several chapels, and each unit operates stress-relief clinics -- such as the one at which the shootings occurred Monday -- where troops can request counseling.

All About Baghdad • Iraq War