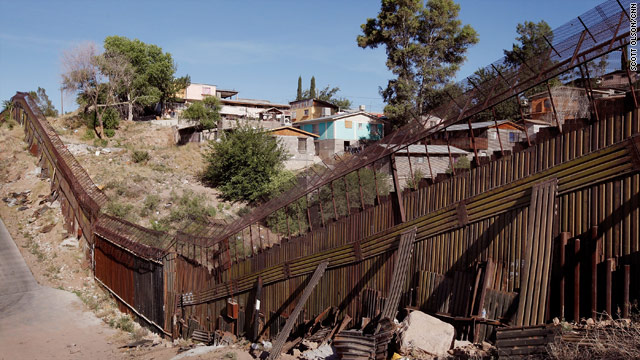 A fence separates the cities of Nogales, Arizona, (on the left) and Nogales, Sonora Mexico.
STORY HIGHLIGHTS
RELATED TOPICS

The threats began less than two weeks ago, after off-duty police officers from the Nogales police department seized several hundred pounds of marijuana from a drug smuggling operation they stumbled upon while horseback riding in the eastern fringes of Nogales, the chief said.

The smugglers in the incident managed to flee into Mexico before they could be detained, Nogales Police Chief Jeffrey Kirkham told CNN.

"We are taking the threats very seriously," Kirkham told CNN. "We have received information from informants who work in Mexico that the drug cartel running that operation was unhappy about our seizure. They told our informant that they understand uniformed police officers have a job to do, but anyone out of uniform who gets involved in their operation will be targeted."

"America is based on freedom. We're not going to be intimidated by the threats, but we are taking them seriously. I've told my officers if they venture into that area off duty to be armed," Kirkham said.

The U.S. Customs and Border Protection sent an increased presence to the area where the bust happened, Kirkham said.

It was unclear which cartel was making the threats against the Nogales police department, but Kirkham said there is a turf war on the other side of the border in Nogales Sonora, Mexico, between the Sinaloa cartel and the Juarez cartel.

Kirkham said he was unaware of cartels trying to bribe or extort his police officers, but he did say cartel's are using the same tactics on U.S. law enforcement that they do on local law enforcement in Mexico.

In May, a former sheriff's deputy in nearby Santa Cruz County -- 29-year-old former deputy Jesus R. Contreras -- and another man were arrested on federal drug-smuggling and gun charges. Local reports said Contreras was wearing a police uniform when he tried smuggling five kilograms of cocaine through a checkpoint on March 2.