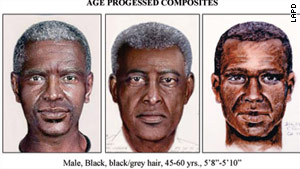 In May, police released composite sketches showing how the "Grim Sleeper" serial killer may have aged.

(CNN) -- Authorities in California said Wednesday they have arrested a suspect in the Grim Sleeper serial killer case and will charge him with 10 counts of murder.

The California Attorney General's office attributed the arrest to DNA collected from a relative of the suspect, in a controversial and rarely used practice known as familial DNA search.

Nicknamed for taking long breaks between attacks, the Grim Sleeper is believed responsible for at least 11 deaths since 1985 in south Los Angeles. The killer targeted black women, some working as prostitutes, using the same small caliber weapon.

Margaret Prescod, who founded the Black Coalition Fighting Back Serial Murders and worked with the families of victims in the case, said the Grim Sleeper Task Force informed her of the arrest Wednesday.

Prescod said Det. Dennis Kilcoyne, head of the task force, told her that unlike a previous arrest in the case that turned out to be wrong, he was sure they had gotten their man this time.

"He told me that what they have is very solid," Prescod said.

Prescod said she is "cautiously optimistic" about the development because there was an arrest years ago in the case, which police touted as solidly based on ballistics evidence, but turned out to be false.

If Franklin turns out to be the Grim Sleeper, "it would be a huge relief, not only for the [victims' families], but for the entire community that remained at threat," Prescod said.

"We are mortified that it has taken this long to make an arrest but nevertheless, one is always glad when there is a breakthrough and we can only hope right now that it is a solid breakthrough."

The program -- which was enacted in 2008 against opposition from civil rights groups -- uses the DNA of family members to find suspects in cases of great risk to the public, Brown's office said in a press release.

Using the DNA of one of Franklin's family members, who had been convicted of a felony weapons charge, investigators established a familial connection between the family member and DNA collected at the murder scenes, the statement said. That connection was used to identify and arrest Franklin after his DNA was obtained.

"This arrest provides proof positive that familial DNA searches must be a part of law enforcement's crime-fighting arsenal. Although the adoption of this new state policy was unprecedented and controversial, in certain cases, it is the only way to bring a dangerous killer to justice," Brown said.

Prescod told CNN she met with victims' family members, who had many questions about the arrest. Family members were told not to give any details about the case or speak to the media until officials hold a press conference Thursday, she said.

Overall, Prescod said, there was a feeling of relief among the relatives of the serial killer's victims.

District Attorney Steve Cooley praised the commitment of the LAPD in solving this multidecade case.

"This was accomplished by the LAPD's hard work with great assistance from the California Department of Justice Division of Law Enforcement personnel," Cooley said.

"There was a lot of painstaking work that went into this and we are very proud of the work our officers have done in making this happen," Villaraigosa said.

Prescod told CNN she had spoken with several of the victims' families, some of whom are members of her coalition, to tell them about the news.

She said family members were screaming and shouting on the phone when she told them the news, elated that perhaps they could find closure in the deaths of their loved ones.

Aerial footage on Wednesday showed police searching cars in the garage of the suspect's home in south Los Angeles -- not far from the corridor where the victims' bodies were dumped.

"That is indeed very close along the corridor that these murders happened," Prescod said of the location. "So it's not surprising, if this is the guy, that it would be someone who is from the neighborhood, familiar with the area."

The LAPD confirmed that they are also searching a second home in the area listed under Franklin's name.

Prescod said much of her organization's efforts focused on the area where Franklin was arrested.

"We went around there, going door-to-door to make sure people knew about the murders. At the time that we did that, most of the people hadn't even heard about the murders and people were concerned because they felt -- this is happening and we frankly don't know anything about it."

Before the arrest, officials struggled to find new leads partially because the changing makeup of the neighborhood where the crimes were committed made it difficult to find witnesses. The killer left behind DNA and fingerprints that police were unable to match to a name.

A 911 call made in 1987 reporting one of the murders led police to a van they believed was involved. But the trail went cold.

In May, new composite sketches of a suspect went up on billboards across Los Angeles as police intensified their hunt for the serial killer.