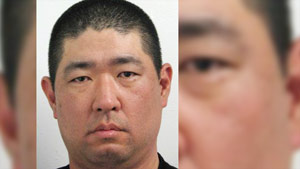 (CNN) -- The man who held at least three hostages in a nearly four-hour standoff Wednesday at the Discovery Channel headquarters in Silver Spring, Maryland, had a history of protesting the network's programming, authorities said.

The man was identified by law enforcement sources as 43-year-old James Lee, who was shot and killed by police after officers observed him withdrawing a handgun and pointing it at one of the hostages. All three hostages -- identified by a Discovery executive as two employees and a security officer -- were uninjured.

Lee was described by authorities as an environmental protester who had posted online rants against Discovery in the past.

An angry manifesto posted by Lee on a website called SaveThePlanetProtest.com repeatedly refers to humans as "filth" and demands that the Discovery Channel "stop encouraging the birth of any more parasitic human infants."

"Civilization must be exposed for the filth it is," the 1,149-word statement says.

"Humans are the most destructive, filthy, pollutive creatures around and are wrecking what's left of the planet with their false morals and breeding culture," it continues.

It demands that the Discovery Channel broadcast daily prime-time shows devoted to "solutions to save the planet," perhaps in a game-show format, insisting "Make it interesting so people watch and apply solutions!!!!"

Many of Lee's comments are directed at "the media," saying "You can reach enough people. It's your responsibility because you reach so many minds!!!"

"The world needs TV shows that DEVELOP solutions to the problems that humans are causing, not stupify the people into destroying the world. Not encouraging them to breed more environmentally harmful humans," the manifesto says.

"These are the demands and sayings of Lee," the manifesto concludes.

The website also refers to a week-long protest outside the Discovery headquarters in February 2008.

"I will be demonstrating ideas on how to save the planet in front of the Discovery Channel Building each day until they give in," he wrote.

Montgomery County, Maryland, Circuit Court records show a man by the same name and age was arrested that month for disorderly conduct and littering.

According to a report by Maryland's Gazette newspaper published at the time, a protester identified as James Lee was arrested outside the Discovery building after several hours of throwing money into the air to gather a crowd.

Montgomery County Police Chief J. Thomas Manger confirmed that the suspect in the hostage situation was the same protester.

Lee, who represented himself in court, said he did it to show that "money means nothing. Money is trash," the Gazette quoted him as saying.

Amateur video apparently showing part of the protest shows a chaotic scene of people diving for the bills.

The protest was cut short after concerns by county police and Discovery security officers that the growing crowd was becoming unruly, according to testimony from Sgt. John Meng of the Montgomery County Police Department.

Lee was found guilty of disorderly conduct in the case and sentenced to supervised probation. His probation ended August 18, court records show.

At the time of his conviction, the judge warned Lee not to come within 500 feet of Discovery Communications, according to the Gazette. The judge told Lee he could get 60 days in jail if he disobeyed the order.

On his protest site, Lee refers to the arrest, writing, "Yeah, I guess the world did not get saved last week as I had hoped," and indicates he was held in police custody for two weeks.

Lee told the court that part of his time in custody included a psychiatric evaluation, according to the Gazette.

"I told them my idea of saving the planet," the Gazette quoted him as saying. "They couldn't find anything wrong with me."

Discovery spokesman David Leavy said Wednesday that the network was aware of Lee and his writings.

"I don't want to characterize the motivations of the perpetrator," he said. "If you follow what he said publicly online, I don't think it's rational. We certainly were cognizant and aware of him, but certainly did not take his threats or demands seriously."

Lee appeared to be inspired by the writings of environmentalist author Daniel Quinn, according to statements made in the manifesto and on Lee's MySpace page.

Quinn is best known for the novel, "Ishmael," for which he won the 1991 Turner Tomorrow Fellowship. The fellowship was established to encourage authors to seek "creative and positive solutions to global problems," according to Quinn's website.

In a 2006 MySpace posting, Lee wrote: "I finished reading the Daniel Quinn books last month. It started off just as a recommendation from a girl who worked at a coffeehouse.

"After being blown away from his writings, I looked up and saw ... nothing. No revolution, no people demanding change, no talk, no news, nothing. There should have been something, right?"