How it feels to bully and be bullied 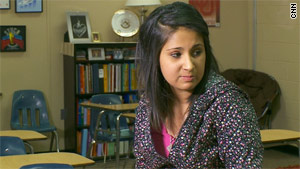 Bullying is in our schools, and now it's online. Why do kids do it? What can be done to put an end to it? Don't miss an "AC360°" special report in collaboration with Cartoon Network: "Stop Bullying: Speak Up," starting Monday night at 10 ET on CNN.

(CNN) -- Oklahoma City's Western Heights High School recently hosted some kids from Upward Bound. The visitors took the stage to urge students to stand up for kids who are bullied at school.

Eighteen-year-old Marisa Velasco shared her story with CNN's "American Morning's" Carol Costello, explaining that she knows how it feels, not only to be bullied, but also to bully.

Carol Costello: You also said that you were a bully?

Costello: What do you mean by that?

Velasco: I mean, in middle school, I felt superior. I mean I had my clique and like there were a lot of us, I mean I can't really think of any right now, but I do remember putting somebody down. I do remember saying mean words, hurtful words to them. But now I know that they do stick with you and that people do take it to heart. And that it does affect people.

Costello: When you were calling people names did it make you feel better?

Velasco: It's not that it made me feel better; it's that I knew they felt worse.

Costello: And when you think back on it now do you have any clue why you would do something like that?

Velasco: I don't really know. I think it just got to me, the whole eighth grade "you're superior" thing. Yeah, and when you get to high school you're back to the bottom, and it's like, "OK, got to start all over."

Video: How to stop a bully

Video: Ellen to bullied kids: There is hope

Video: Tyra Banks: I was a bully

Costello: Is it worse in junior high than it is in high school?

Costello: When you were in junior high, and you were the bully, were there kids who you picked on who you just didn't like for any real reason?

Velasco: Um, I don't really know if there was a real reason. I guess it was just an easy target I guess.

Costello: Is it because other kids were making fun of those kids, too?

Velasco: Yeah, there were a lot of others also bullying.

Costello: So If someone were to come up to you and say, "You know, look, that's really not a very nice thing to do. Stop making fun of this kid." What would you have said?

Velasco: I would have said, "Back off. It's my business and not yours." And that's how high school is right now. Nobody should get in any other person's business. 'Cause it's a one on one thing, or even if it's others, it's personal. ...

Velasco: Well, one person can be the right person.

Costello: What do you mean?

Velasco: Well, I actually did have someone come up to me and say that isn't right. And [they asked] why is the reason you are going against them? And I really didn't have a reason, so like, whoa ... so ... I shouldn't.

Costello: So someone made you aware of what you were doing? And you were like, "Why am I doing that?"

Velasco: Yeah, it was pretty much like I don't have a reason to ... just because they don't like them, I shouldn't like them. That's not right.

Costello: So now you're taking part in this effort with Upward Bound and you're trying to fight bullying because you've been both the victim and the bully. So you bring a really great perspective, I think, to the group. So what advice would you have for kids in school?

Costello: If one kid sees another kid bullying, what should that kid do?

Velasco: Stand up, not stand by.

Costello: So you should be brave enough to go up to someone and say that's not right.

Costello: And sometimes that's all it takes?

Velasco: I think that it would make them the target, but together ... I think there is power in numbers and you can do it together. You can actually put a stop to it and go forward and be the helping hand.

Costello: Is it more effective for another student to approach a bully instead of another teacher?

Velasco: I think that when it's student-to-student there would be a conflict. And when it's a teacher and it's up to them, they stop it for a while. So you don't know when it's really going to go on. And it's going to keep on going. If it's a student that goes up to them, it depends -- it does get to them. They get the message even if it's wrong or right.

Costello: A lot of schools are throwing assemblies and they have a lot of guest speakers saying that you shouldn't bully and that it's wrong. Does that get through to someone who bullies?

Velasco: To me personally, I would listen and I would get pumped up in the assemblies. But as soon as I walked out the door, it was something different. It didn't really, like, stick to me.

Costello: So the more effective thing to do is have kids speaking at these assemblies rather than adults or teachers?

Velasco: I think being on the same level helps out a lot.

Costello: And what words do they need to use?

Velasco: That -- what does it get you? Why are you doing that? Accept others. Be somebody. Be the change. Be the solution.