Scott Brown could be sworn in Thursday 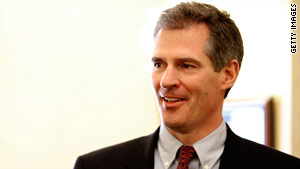 (CNN) -- The election victory of Massachusetts Sen.-elect Scott Brown is expected to be certified Thursday, which could allow him to be sworn in as early as Thursday afternoon to replace the late Sen. Ted Kennedy.

Brown's win stripped Democrats of their 60-seat, filibuster-proof majority in the U.S. Senate and raised fears among many congressional Democrats about a potential GOP landslide in November's midterm elections.

Brown had asked for immediate certification.

In a letter to Massachusetts Gov. Deval Patrick and Secretary of State William Galvin, Brown's attorney says the Republican senator-elect had planned on being sworn in on February 11, but he has been told that several Senate votes will be held before then.

"For this reason, he wants certification to occur immediately," attorney Daniel Winslow wrote.