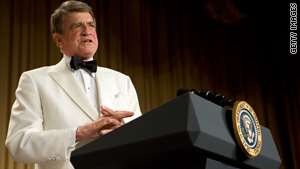 The 12-term congressman, who served the state's second congressional district, had been in a meeting Wednesday morning with a friend when he complained of difficulty breathing, said Yana Ogletree, a spokeswoman for Memorial Medical Center in Lufkin.

Wilson, who had undergone a heart transplant at Methodist Hospital in Houston in September 2007, moved back to Lufkin when he retired from Congress in 1997 after having served since 1973, she said.

"I had the unforgettable experience of knowing Congressman Wilson when I was at CIA and he was working tirelessly on behalf of the Afghan resistance fighting the Soviets," said Defense Secretary Robert Gates in a written statement.

"As the world now knows, his efforts and exploits helped repel an invader, liberate a people and bring the Cold War to a close. After the Soviets left, Charlie kept fighting for the Afghan people and warned against abandoning that traumatized country to its fate -- a warning we should have heeded then, and should remember today."

"Charlie Wilson led a life that was oversized even by Hollywood's standards," said Texas Gov. Rick Perry in a statement. "Congressman Wilson was fiercely devoted to serving his country and his fellow Texans."

"Charlie was a man of courage and conviction who worked hard, loved his country, and lived life to the fullest," said House Appropriations Committee Chairman David R. Obey, D-Wisconsin. "We will miss him."

Tom Hanks portrayed the flamboyant congressman in the 2007 movie "Charlie Wilson's War," based on the book by George Crile. The book and the film told the story of Wilson's efforts to get weapons to Mujahedeen fighters after Soviets invaded Afghanistan.

"Hanks did a great job," Wilson said in 2008. Wilson also praised the other actors. "They were too close to the truth," he said.

The U.S. Naval Academy grad and Navy veteran was elected to Congress in 1972 -- a Democrat bucking the national Nixon landslide -- and quickly became known for his high-living escapades, which earned him the nickname "Good Time Charlie," and shrewd accumulation of political chits.

His savvy came in handy in the early 1980s, when Wilson, a staunch anti-Communist, decided to help Afghan rebels in their war against the invading Soviet Union. Over several years, working behind the scenes, his efforts to raise funds through his defense subcommittee, to establish a bond with a CIA agent named Gust Avrakotos (played by Philip Seymour Hoffman in the film) and to negotiate support from Middle Eastern countries helped the Afghans take the upper hand and eventually forced the Soviets out of the country.

Asked what led to the Soviet departure, Pakistani leader Gen. Muhammad Zia ul-Haq was blunt: "Charlie did it," he told CBS News' "60 Minutes."

Some people criticized the film because it didn't do much to highlight what happened in Afghanistan after the Soviets left: the Taliban's takeover of the country and al Qaeda's use of the nation as a base. Wilson was asked in 2008 about the consequences of helping the Mujahedeen fighters.

"I don't think there was a serious blowback," Wilson said. "I think there was the point that [author] George Crile made in the [book's] epilogue, that the Muslims saw that they took down one superpower and then the radical ones thought they could take down another one. But they're wrong."

Wilson is survived by his wife, Barbara Alberstadt Wilson, a sister, a niece and a nephew.