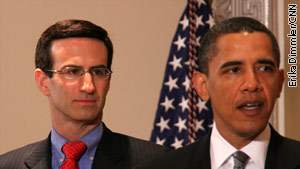 Orszag, 41, has been a key part of Obama's economic team, serving in his role as director of the Office of Management and Budget during the passage of the economic stimulus bill and this year's health care reform legislation.

As budget director, he crafted policy, but also was a prime negotiator with congressional Republicans.

As one of the main negotiators in the final hours before lawmakers passed the economic stimulus package, Orszag tried to bridge differences and was keeper of the ever-changing numbers, often crunching them in his head.

Orszag headed the Congressional Budget Office for almost two years before Obama tapped him to be the White House budget director shortly after the 2008 presidential election.

He also worked at the Clinton White House as special assistant to the president at the National Economic Council and served on the Council of Economic Advisors.

Orszag is known in the halls of Congress for wearing cowboy boots with his business suit and has quoted country music songs during budget hearings.