Letter: No charges in firing of 9 U.S. attorneys during Bush years 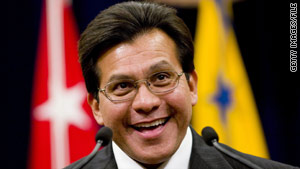 Former U.S. Attorney General Alberto Gonzales will not be charged in the firing of 9 U.S. attorneys.
STORY HIGHLIGHTS
RELATED TOPICS

Washington (CNN) -- The Justice Department says it has decided not to charge former U.S. Attorney General Alberto Gonzales or other Bush administration officials in the controversial firings of nine U. S. attorneys, according to a letter sent to the chairman of the House Judiciary Committee.

Special counsel Nora Dannehy investigated the firings and Attorney General Eric Holder "has accepted her recommendation that criminal prosecution is not warranted," the letter said.

The question as to whether the dismissals were made for political reasons led to a huge controversy in Washington. Gonzales ultimately resigned.

In the letter, Associate Attorney General Ronald Welch said Gonzales made "inaccurate and misleading" statements about the firings. The report also said Gonzales' chief of staff, Kyle Sampson, also made misleading statements. But the report by Dannehy concluded there was "insufficient evidence to establish that persons knowingly made material false statements" or tried to obstruct justice.

An earlier report by the Justice Department's Office of the Inspector General and the Office of Professional Responsibility drew particular attention to the 2006 firing of New Mexico's U.S. attorney, David Iglesias, and whether he was fired to influence voter fraud prosecutions in his state. Dannehy's probe did not find "any prosecutable criminal offense was committed with regard to the removal of David Iglesias."

George Terwilliger, a lawyer representing former Gonzales, issued a statement welcoming the end of the 22-month investigation and saying Gonzales was "vindicated by the Justice Department's long overdue conclusion."

The statement said Gonzales had consistently maintained he had done nothing wrong. "Those who made unwarranted allegations and predicted a prosecution owe Judge Gonzales an apology," said Terwilliger.