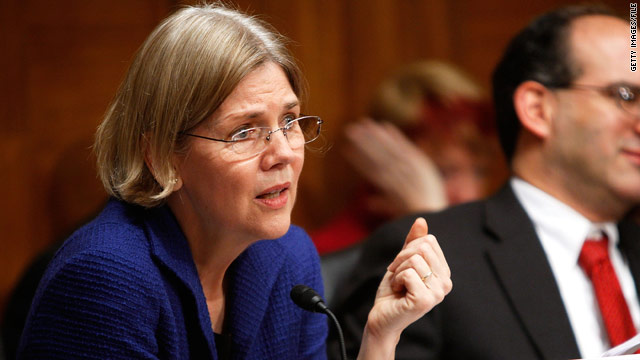 Washington (CNN) -- President Obama plans to name Elizabeth Warren as a special adviser to help set up a new consumer protection agency created under the Wall Street reform bill, according to sources who spoke on condition of not being identified by name.

A Democratic official said Wednesday that Warren's title would be assistant to the president and special adviser to the secretary of the Treasury on the Consumer Financial Protection Bureau.

In her role, Warren would report directly to Obama and to Treasury Secretary Tim Geithner while leading the administration's work in starting up the new bureau, the official said.

In addition, a senior administration official said Obama will name Warren to the advisory position this week.

The move would allow Warren to help set up the new consumer protection agency but bypass a potentially difficult Senate confirmation battle if she were nominated to formally run the agency.

At his news conference last week, Obama said the Senate confirmation process has been bogged down by Republican partisanship. Obama said then he had several conversations with Warren, a Harvard University professor who has long been considered the leading candidate for the job, but he stopped short of officially nominating her.

Warren, 61, was favored by liberal Democrats to run the new agency charged with protecting consumers from abusive mortgage and credit card practices. However, her nomination was considered likely to draw opposition in the Senate over concerns about her liberal leanings and lack of government experience.

It was unclear how much authority Warren would have in the advisory role.

The Democratic official said that appointing Warren as an advisor would allow her to get involved immediately in setting up the agency. If nominated to be the new agency's director, she would be unable to play a decision-making role until confirmed, the official noted.

Obama can still nominate a director of the new bureau, and Warren will participate in the selection process, the official added.

A spokesperson for Moveon.org, the liberal political advocacy group, said the title of Warren's job wouldn't matter if she had the necessary clout.

"As long as Professor Warren has real power, real authority and real support to hold the big banks accountable and stand up for American families, then our members -- and Americans everywhere -- will welcome this news," said Ilyse Hogue, the group's director of political advocacy and communications.

The Progressive Change Campaign Committee, which led a campaign to get Warren named the director of the new agency, said in a statement it hoped the appointment would provide Warren with the power she needed to do the job right.

"If Elizabeth Warren is given full power to run the new consumer protection bureau and hold Wall Street accountable, it will mean real change -- and voters will know that going into November's election," the group's statement said. "If this appointment is window dressing and Tim Geithner controls the show, it would be a big disappointment and a victory for Wall Street."

Sen. Bernie Sanders, the Vermont independent who sits with the Democratic caucus, praised the move by Obama as a necessary step to get the new agency running.

"At a time when the working families of this country are profoundly disgusted by the greed, recklessness and illegal behavior of Wall Street, I applaud President Obama for appointing a tough and brilliant advocate to head the new Financial Consumer Protection Bureau," Sanders said. "The American people are tired of being ripped off by large banks and financial institutions and, in Professor Warren, they finally will have someone in a position of power who can protect their interests."

On Tuesday, the Democratic chairman of the Senate Banking Committee warned that bypassing the Senate confirmation process would be a mistake.

"I'm not enthusiastic about that. I think it will be met with a lot of opposition," Sen. Chris Dodd of Connecticut told reporters.

"You've got to build the support for it institutionally, or in the next Congress -- none of us know what the outcome is going to be, politically -- you could gut this before it even gets off the ground," Dodd said. "If you don't have someone running it early on, it jeopardizes the existence of the consumer protection bureau."

Asked how the next Congress might gut the position, Dodd responded, "Money, take away the money. That's how you always do it."

The agency, known as the bureau of consumer financial protection, is a key part of the administration's regulatory reform bill signed into law earlier this year.