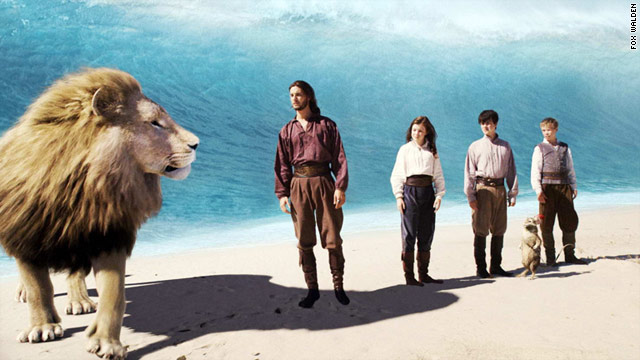 "The Chronicles of Narnia: The Voyage of the Dawn Treader" takes its characters on a whimsical journey.
STORY HIGHLIGHTS
RELATED TOPICS

(CNN) -- The third of C.S. Lewis' "Narnia" books to make it to the big screen almost didn't happen when Disney lost the faith after the "disappointing" returns for "Prince Caspian," with its worldwide box office gross of $419 million.

Fortunately for fans of wholesome Christian family action and adventure, Fox stepped in, and production company Walden Films has completed the story of the Pevensies, Lucy and Edmund, who first made their way through the back of that magical wardrobe five years ago. Unfortunately for fans of fantasy film, the budget appears to have been slashed across the board for "The Chronicles of Narnia: The Voyage of the Dawn Treader."

Per the book, Susan and Edward are out of the picture now, having swapped the innocent enchantments of Narnia for the more mundane diversions of America.

Lucy and Edmund, though, are sticking out Nazi Germany's Blitz in suburban England, at the home of their despised cousin, Eustace. That is, until an apparently undistinguished maritime painting begins to leak seawater, flooding their bedroom and transporting all three children beneath the hull of the Dawn Treader.

They're soon safely inducted into Caspian's quest to recover seven missing lords, and more importantly their ancient swords, from the Lone Isles at the outer reaches of the known world.

Lewis modeled this mock-heroic adventure on "The Odyssey," but modern kids are more likely to be reminded of video games and "The Pirates of the Caribbean."

The voyage skips from one magical isle to the next, each promising another sword and paving the way to the next level. It's less bombastic than "Prince Caspian," with a quirkier sensibility that encompasses a malignant green sea mist, invisible giants and a pool that turns everything that touches it to gold.

That mist is the only real villain of the piece -- an amorphous evil contaminant that thrives on fear, but which unfortunately isn't very frightening at all. It's like being molested by a rancid cloud.

Directed without obvious enthusiasm by veteran Michael Apted -- whose career runs from the "7 Up" documentary series to "Coal Miner's Daughter" and the James Bond thriller "The World Is Not Enough" -- "Voyage" is more suitable for young children than the previous film, or the last couple of Harry Potter movies for that matter.

Parents may wince at the amateurish acting, the ugly and distancing 3-D post-production work and some decidedly threadbare special effects, but at least their kids won't come out traumatized or battle-scarred.

Will Poulter (from "Son of Rambow") functions as the main comic relief as the obnoxious Eustace, and throws himself into the part with such gusto it's a relief when he meets his comeuppance in the form of a fire-breathing dragon.

As Edmund and Lucy, Skandar Keynes and Georgie Henley are old hands by now, but they've lost some of their charm in the process.

And it's a mystery what's become of Ben Barnes' Spanish accent since "Prince Caspian" and his charisma. Perhaps it vanished along with Reepicheep's plumy tones in some previous magical engagement -- the valiant rodent is now voiced by Simon Pegg, not Eddie Izzard.

A spectacular CGI-heavy climax reclaims some of the movie's credibility, but there's something sketchy about Aslan's final invitation to show the children the promised land, the place from which there is no return. All in good time, surely?

As for Narnia, there are four more C.S. Lewis books, one of which ("The Silver Chair") features Eustace. But the Pevensies are done now, and the filmmakers may feel it's time to call it quits.

It's been a serviceable series, but a mild disappointment to those of us who grew up with these books, and it never seriously challenged the Harry Potter films for hearts or minds.