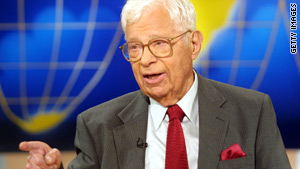 NPR, which Schorr joined as senior news analyst in 1985, said he died peacefully after a short illness.

His coverage put him on Richard Nixon's infamous "enemies list."

"Dan Schorr was an indefatigable and very good reporter," former CBS anchor Dan Rather said. "He was an eye witness to many of the great events of the twentieth century. He covered them with accuracy and integrity."

Schorr's career was marked with controversy, but he served as an elder statesman of journalism in his last decades with NPR.

"Nobody else in broadcast journalism -- or perhaps any field -- had as much experience and wisdom," Scott Simon said. "I am just glad that, after being known for so many years as a tough and uncompromising journalist, NPR listeners also got to know the Dan Schorr that was playful, funny and kind."

Schorr covered the rebuilding of Western Europe for the Christian Science Monitor starting in 1946.

Schorr resigned from CBS in 1976 after the network suspended him amid a controversy over the leaking of a secret U.S. intelligence report. Schorr refused to tell Congress the source of the document, citing his First Amendment protections.

CNN founder Ted Turner hired Schorr in 1979 as he was preparing to launch the Cable News Network the next summer.

"With Schorr in place, nobody in the news business would question CNN's integrity," Hank Whittemore wrote in his 1990 book "CNN: The Inside Story."

"In terms of the image presented to the journalism community, Turner and Schorr could be 'matching bookends,'" Whittemore wrote.

Schorr's many awards included a Peabody for "a lifetime of uncompromising reporting of the highest integrity," three Emmys and the duPont-Columbia Golden Baton.