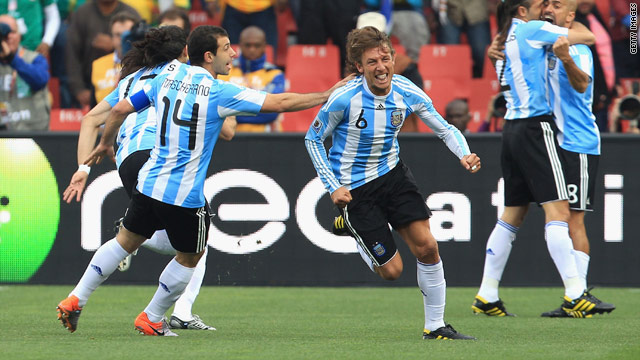 Gabriel Heinze wheels away in triumph after his early headed goal against Nigeria.
STORY HIGHLIGHTS

(CNN) -- Argentina's star-studded line-up began their World Cup campaign with a 1-0 victory over Nigeria in their Group B opener in Johannesburg on Saturday.

A goal from defender Gabriel Heinze after six minutes was all that separated the two teams after an inspired display from Nigeria goalkeeper Vincent Enyeama.

But South Korea ended the day on top of the group following a 2-0 victory over Greece in Port Elizabeth earlier on Saturday.

Goals from Lee Jung-Soo and Park Ji-Sung gave the 2002 semifinalists a comfortable win over the 2008 European cvhampions.

Enyeama could do little to stop Heinze's powerful early header from a Juan Sebastian Veron corner, but he kept his team alive with a string of acrobatic saves to deny World Player of the Year Lionel Messi.

Diego Maradona was delighted to secure his first victory as a World Cup coach, but critical of his strikers for failing to make the game safe.

"When you don't kill things off in front of goal you can pay a heavy price. They almost got a draw -- we missed loads of chances," Maradona told AFP.

"Players such as Leo Messi and Higuain knocked in around 60 goals last season between them, yet today it was almost as if they couldn't set their sights on goal.

"But the win means we can be calm -- we are in the right track."

Enyeama's tip over from a Messi shot led to the early corner from which the unmarked Heinze scored to spark scenes of wild celebration on the Argentina bench, led by Maradona.

Messi and Gonzalo Higuain might both have had hat-tricks as Argentina's attacking flair was evident, but at the other end Nigeria also had opportunities to salvage a point.

Midway through the second half, Taye Taiwo found space to toe-poke a shot from the edge of the area which went just wide of Sergio Romero's left-hand post.

As the clock ticked down, Enyeama blocked Messi as he looked certain to score but in a swift counter attack Nigeria then had their best chance of the match as Aiyegbeni Yakubu crossed from the right and Kala Uche made a hash of his volleyed attempt from 10 meters out.

At the final whistle it was a deserved victory for Argentina, but they will face a sterner test in their next match in five days' time against South Korea.

Nigeria, who have lost five and drawn once since their last World Cup finals victory in 1998, will be looking to break that winless run against the Greeks, who also have a poor record in football's global showpiece.

Goals from Lee Jung-Soo and Park Ji-Sung earned South Korea a comfortable 2-0 win against a poor Greek side, who never looked like getting on the score sheet.

South Korea should have gone 2-0 up after 23 minutes when Monaco striker Park Chu-Young was sent through on goal by a defense-splitting pass from the boot of Park Ji-Sung, but goalkeeper Alexandros Tzorvas saved to send the ball onto the roof of the net.

The second half carried on where the first finished off, and it was no surprise when Park Ji-Sung added a second goal after 52 minutes.

Latching on to a mistake made by Loukas Vyntra, the Manchester United midfielder swept forward into the penalty area before coolly slotting past a helpless Tzorvas.

The goal did seem to finally wake Greece from their slumber, and striker Theofanis Gekas forced a fine save from Jung Sung Ryon in the 80th minute, but it was a rare moment of skill in a woeful display.

Moments later, Lee Chung-Young nearly added a third for South Korea at the other end.

The result means Greece continue their winless World Cup finals record. Their only other appearance in 1994 yielded no goals and no points.

Paul the octopus, who correctly predicted the outcome of eight World Cup matches in a row, is retiring from the forecasting business.
CNN's Twitter Buzz

Who's tweeting about what? Follow the World Cup trends and all the latest action from South Africa.
Are you passionate enough?

Are you a fanatical supporter of your national football team? Do you like to shout about your opinions? Become a CNN Super Fan!
Results and Standings

Check out all the scores, group tables and fixtures
CNN teams up with Foursquare

Let your friends know where you're watching the World Cup, and earn CNN badges while you're having fun.