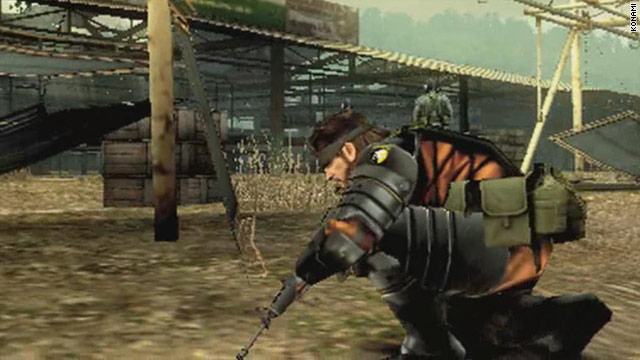 In "Metal Gear Solid: Peace Walker," you get to choose whether hero Snake will use stealth or force to take out bad guys.
STORY HIGHLIGHTS
RELATED TOPICS

The story is set in 1974 in Costa Rica, where Snake trains a group of mercenary soldiers whose talents and loyalties know no bounds. The mission starts off with Snake investigating reports of nuclear weapons brought into Central America by the CIA.

But what really drives him through this game is what he went through in "Metal Gear Solid 3" when he killed his mentor, Big Boss. Her voice is played on a tape early in the game -- and now Snake wants to find out why his former love turned rogue.

The gameplay is typical "MGS" style, with lots of creeping around and taking out bad guys silently and quickly. The Close Quarters Combat moves make grabbing a guy easier than ever. From the headlock, players can hold the enemy hostage, choke him into unconsciousness, or toss him into other enemies and clear the field.

Many missions can be completed without even firing a weapon, relying completely on stealth and silence. A meter lets players know how hidden they are at any given time. At one point, Snake lay prone in the jungle and waited for a soldier to nearly walk on him before popping up and dispatching him with a choke hold.

The only time stealth doesn't work is during the boss battles, which usually involve some sort of military vehicle like a tank or helicopter. These segments allow players to really open up with the heavy ammunition to show off how powerful Snake can be. Use of cover and high-yield weaponry often bring victory sooner rather than later.

Cut scenes -- pauses in the action -- are plentiful and done in a noir style of animation. But don't just set down the handheld console while they play. Quick-time events, situations that require players to push a button at a specific moment, crop up even during the cut scenes. Fortunately, the game doesn't punish the player for missing the initial button-mashing event.

"MGS:PW" is expansive. There are many missions along the main storyline, but there are plenty of side missions that allow Snake's crew members to gain experience and learn skills that can help him out. Co-op play with up to four players in some scenes is also weaved through the game and available on every mission. Some stand-alone challenge missions reward players with special weapons.

Don't expect to finish this excellent game quickly. Even if you complete the main story, the gameplay and combat modes will bring you back to polish off all the other missions and challenges. It really is that much fun to play.

"Metal Gear Solid: Peace Walker" (Konami) is ninth title in the Metal Gear series, but falls third in the story line's continuity. It is available only on the Sony PSP handheld console.