By A. Pawlowski, CNN 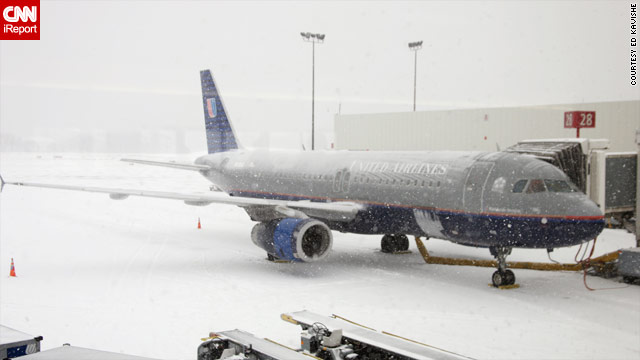 (CNN) -- Here we go again. Just as travel was getting back to normal after a monster snowstorm in the East that stranded airline passengers over the weekend, more snow is falling, and more frustration is expected at airports across the region.

Hundreds of flights already have been canceled and airlines are adjusting Wednesday's schedules in preparation for the bad weather ahead.

Continental Airlines announced it would suspend operations at its Newark, New Jersey, hub on Wednesday. Other airports in the Northeast and Midwest will also be affected by the storm, the airline said.

"If you're traveling today or later tomorrow through D.C., New York or Philadelphia, you're going to want to take pre-emptive action and potentially call and try to get out today because tomorrow looks to be a bit of a mess for those airports," said CNN meteorologist Rob Marciano.

At Ronald Reagan Washington National Airport, passengers scrambled to catch flights early Tuesday before the next blizzard hit. The airport already was dealing with a three-day backlog after the first storm, CNN's Sarah Lee reported.

"We hope it's not a rerun in terms of accumulation," said Tara Hamilton, a spokeswoman for the Metropolitan Washington Airports Authority. "When it starts to snow, we'll likely see some cancellations this afternoon."

More than 500 flights have been canceled at Chicago, Illinois', O'Hare International Airport, where airlines are reporting delays of 45 minutes or more for flights in and out.

Delta Air Lines is planning a significant reduction of flights to Washington and Philadelphia, Pennsylvania, starting Tuesday afternoon, said spokesman Anthony Black. The airline canceled 375 flights nationwide even as it was dealing with a backlog of passengers after the weekend's messy weather.

Delta will make a decision about Wednesday's cancellations early Tuesday evening, he added.

The airline is holding off on cancellations at New York-area airports and in Boston, Massachusetts, until there is more information about how the weather system progresses.

Many of the major airlines have relaxed their ticket policies for passengers affected by the weather, Lee reported. Air travelers were urged to check with their airline on the temporary changes.

The National Weather Service has issued winter storm warnings for large parts of the Northeast, mid-Atlantic region and Midwest -- 20 states in all -- with up to 20 inches of snow expected to accumulate in some areas.

Amtrak is operating limited Acela Express and Northeast Regional service between New York and Washington on Tuesday as the region recovers after last weekend's snowstorm.

In that blizzard, a record 32.4 inches of snow fell on Washington's Dulles International Airport over two days, breaking a January 7-8, 1996, record of 23.2 inches.