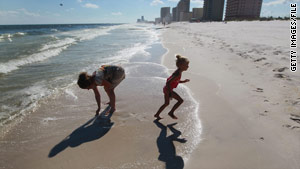 (CNN) -- Perception is the wild card in how the oil disaster will affect the Gulf coast region's travel revenue, according to analysis conducted by Oxford Economics for the U.S. Travel Association.

The effects of the oil spill on the region's travel industry could last up to three years and cost up to $22.7 billion, according to the study released Thursday.

In preparing the research, Oxford Economics looked at current spending, government models predicting oil flow and the effect of 25 past crises on tourism to develop a model to gauge the Gulf disaster's impact, according to Adam Sacks, managing director for Oxford Economics.

To mitigate the effects of the disaster, changing perceptions is key.

"Given that traveler reaction is the key lever that we have at our disposal in terms of being able to affect and mitigate the impacts, perceptions matter a lot," Sacks said at a news conference.

Case studies of past disasters -- including the SARS respiratory outbreak, Hurricane Katrina and the 2004 Asian tsunami -- show that tourism often is affected beyond the disaster area and long after the resolution of the crisis.

The U.S. Travel Association has called for a $500 million emergency marketing fund from BP to help destinations distribute clear information to travelers and attract new visitors.

Part of a 10-point Roadmap to Recovery that the association has presented to the government, the marketing fund could reduce the total economic drag of the oil disaster by a third, or $7.5 billion, the study says.

Expanding tax breaks to businesses hurt by the spill and incentivizing travel to the region also are among the association's recommendations.

"It's not too late for the government to prevent further damage," said Roger Dow, the U.S. Travel Association's president and CEO.

The economic impact model looked at high- and low-impact scenarios, based on National Oceanic and Atmospheric Administration oil-flow probabilities. If the final oil flow is closer to the lower end, the study indicated the travel industry disruption would last at least 15 months and cost $7.6 billion in lost tourism revenues.

Visitors spent more than $34 billion in 2008 in congressional districts along the Gulf Coast, sustaining 400,000 jobs.