Part of complete coverage on
In America 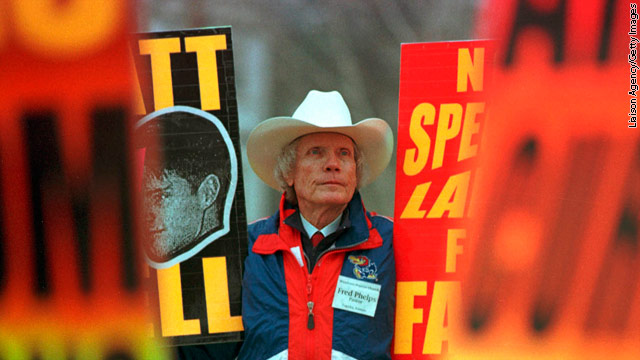 Rev. Fred Phelps denunciation of gays made him famous, but few know that he was a civil rights lawyer who fought racism.
STORY HIGHLIGHTS

Editor's note: To accurately portray the subject of this article and his critics, offensive language is quoted.

(CNN) -- He is the leader of "America's most hated family," a gaunt, craggy-faced preacher who displays "God Hates Fags" signs at the funerals of American troops, gay men and AIDS victims.

For at least 12 years, the Rev. Fred Phelps has led his Topeka, Kansas, church on a cross-country crusade against gays and lesbians. That crusade ignited a legal battle that has reached the U.S. Supreme Court.

But there is another Phelps that few know. He was a "brilliant" civil rights attorney in the 1960s who would take on racial discrimination cases that no other lawyers would touch, say longtime African-American civic leaders in Topeka.

He fought for the rights of blacks, they say, with the same passion he now reserves for the condemnation of gays.

"I see him out there, and I hear the venom that comes out of his mouth. If you had asked me in the '60s if he would do this, I would have said never."

The Rev. Ben Scott, president of the NAACP's Topeka branch, says he never heard Phelps talk about homosexuals during his work as a civil rights attorney.

"I didn't even know he was a preacher," Scott says.

If you had asked me in the '60s if he would do this, I would have said never.
--Joe Douglas Jr. on Fred Phelps
RELATED TOPICS

"You're born black. It's something you can't change even if you're Michael Jackson," she says. "God never said it was an abomination to be black."

Most of the members of Phelps' Westboro Baptist Church are members of his large family. Phelps has 13 children; 11 are attorneys. One son, Nate Phelps, is estranged from his father, and from organized religion. He is an atheist.

"He preached that we were the chosen ones but then he went out and treated people horribly," Nathan Phelps says.

His father first attracted national headlines in 1998 at the funeral of Matthew Shepard, a Wyoming college student. Shepard was tortured and murdered for being gay. Fred Phelps and his church picketed Shepard's funeral, carrying signs that said Shepard was rotting in hell.

In 2006, members of Phelps' church appeared at the funeral of an American Marine killed in Iraq carrying signs reading "Thank God for Dead Soldiers" and shouting at mourners.

Phelps' church claims the deaths are God's punishment for the nation's tolerance of homosexuality.

The family of the Marine sued Phelps' church the next year, alleging invasion of privacy, intentional infliction of emotional distress and civil conspiracy. The case went to trial and a jury awarded the family $2.9 million in compensatory damages plus $8 million in punitive damages, which were reduced to $5 million.

That verdict, however, was reversed when Phelps' church appealed. In March, Supreme Court justices accepted an appeal from the father of the fallen Marine. The court is being asked to address how far entities such as cemeteries and churches can go in restricting demonstrators' right to free speech.

In Topeka, longtime civil rights activists say they were accustomed to seeing Phelps fight another type of battle in the courts.

By the time Phelps moved to Topeka in 1954, it had become the launching ground for the modern civil rights movement. That was the year the U.S. Supreme Court banned segregation in public schools with its historic Brown vs. Topeka Board of Education decision.

Jack Alexander, a Topeka native and civil rights activist, says the Brown decision opened the door for discrimination suits. Phelps would take cases in the 1960s that other lawyers, black and white, wouldn't touch, he says.

"Back in that era, most black attorneys were busy trying to make a living," says Alexander, who became the first black elected in the city of Topeka, as a member of the Topeka City Commission.

"They couldn't take those cases on the chance they wouldn't get paid. But Fred was taking those cases."

Phelps was so successful that he became the first lawyer blacks would call when they thought they were being discriminated against, says the NAACP's Scott.

"Most blacks -- that's who they went to," Scott says. "I don't know if he was cheaper or if he had that stick-to-it-ness, but Fred didn't lose many back then."

Douglas, the Topeka civil rights activist and former fire chief, says Phelps was such a "brilliant attorney" that he made enemies.

"He made a fortune on all those cases," Douglas says. "All the businesses hated him because he was so successful. I think if they discriminated against Martians, he would have done those cases. He could make money."

Douglas says he had no clue then about Phelps' attitude toward gays and lesbians.

God never said it was an abomination to be black.
--Shirley Phelps-Roper, Phelps' daughter

"He didn't even talk about that," Douglas says. "As long as I've known him, I never heard him discuss it, but now it's his whole life."

Phelps' daughter says her father took up civil rights cases because of his upbringing. Phelps was born in the Deep South during segregation.

"He grew up in Mississippi seeing the way they treated black people," Phelps-Roper says.

Her father didn't adopt the same racist beliefs only "because of the mercy of God."

Having people hate them is nothing new for Phelps and his family, she says. People shot out their windows and threatened her father because he stood up for blacks in Kansas.

After her father delivered an editorial on local television one night bemoaning white racism, she says, the phone rang.

"When I picked up that phone, somebody is screaming nigger lover in my ear," she says. "That sticks with you. That's not the first time nor the last time I heard that."

Phelps was disbarred in 1979 by the Kansas Supreme Court after he became the subject of a complaint alleging witness badgering. The court wrote: "The seriousness of the present case coupled with his previous record leads this court to the conclusion that respondent has little regard for the ethics of his profession."

Phelps-Roper contends her father was disbarred in Kansas state court for standing up for blacks.

"Those people hated us for that work," she says. "The state hated us for it. They could hardly bring themselves to be civil because we won those verdicts."

Was Phelps motivated by idealism or money?

Phelps' critics now despise him for another reason -- his anti-gay activism.

It has earned him so much notoriety that he is internationally known. In 2007, the BBC produced a documentary on Phelps and his church entitled "The Most Hated Family in America."

Phelps' anti-gay pickets continue even though his case is pending before the U.S. Supreme Court. The family plans to visit Atlanta, Georgia, starting Wednesday for two days of protests, including one at a Jewish community center and a playhouse staging a production in honor of Shepard, the slain gay college student.

Mark Potok, a center spokesman, says Phelps uses anti-Semitic language in the fliers and tracts he dispatches from his church today.

"I don't think he gives a damn about civil rights; maybe he once did," Potok says. "Whatever atom of sympathy he had for the civil rights movement is clearly gone now."

Nate Phelps, the estranged son, says his father held racist attitudes even during his work as a civil rights attorney.

He says his father didn't believe blacks were equal to whites, and often insulted blacks out of earshot.

"They would come into his office and after they left, he would talk about how stupid they were and call them dumb niggers," Phelps says.

But Phelps-Roper, Nathan's sister, says their father was no racist. She says that Potok doesn't know her father. And she calls her brother Nathan a "rebel of God." She says her father didn't use racist language and Nathan wouldn't have been in a position to know.

"Nathan is a tortured soul," she says. "He has no grace. God had no mercy upon him. He's hardened his heart."

Phelps-Roper says her father and family have eked out a modest living and her father's church doesn't take money from anyone.

God said the world would hate believers like her father in the last hours, she says.

People may judge her father; the courts may do the same. But she says in an e-mail message filled with scriptural references that she is waiting for another judgment.

"This nation is on a short path to her full, final and complete destruction!" Phelps-Roper says. "It will be beautiful and it will be righteous."