Feds, locals have their own battles with oil spill 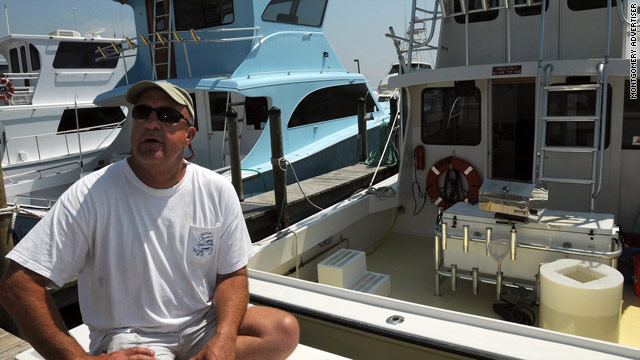 Fisherman Allen Kruse, a charter boat captain, took a job assisting in the oil spill clean-up. His body was found on his boat Wednesday, dead from a single gunshot to the head.
STORY HIGHLIGHTS

New Orleans, Louisiana (CNN) -- As the Gulf of Mexico oil spill enters its 65th day, the confirmed suicide of an Alabama fisherman served as a reminder Thursday of how the effects of the disaster can be felt from the national level to the neighborhood level.

While the powers in Washington wrangle over the fate of a drilling ban, residents on the Gulf coast are fighting their own battles with the oil.

"He was 55 years old. He was a charter boat captain," Stan Vinson, coroner for Baldwin County, Alabama, said of the fisherman, Allen Kruse.

After the oil began spilling into the areas where Kruse would take people fishing, the fishing grounds were closed, leaving him out of work.

According to Vinson, Kruse took a job helping BP fight the oil, making his boat a so-called "vessel of opportunity."

"He was on the boat alone, and he had been with the deckhands," Vinson said Wednesday. "He was loading the boat this morning just like he normally would. They were supposed to go out today, (and) he told the deckhands to go get some ice for the boat, that he was going to pull it around."

After the deckhands went to run their errands, though, the boat never pulled around and they came back to the boat to find him dead, Vinson said.

The deputy coroner, Rod Steade Sr., confirmed Thursday that Kruse's death was a suicide and he died of a single gunshot wound to the head.

On the frontlines of the oil spill, the battle seems more personal.

In a press briefing with reporters Thursday, Coast Guard Capt. Roger Laferriere, Incident Commander for Houma, Louisiana, spoke passionately of the work being done on the coast.

The Coast Guard deployed 20,000 gallons of dispersants into the water Thursday, he said, and more than 1.3 million feet of boom are deployed around the state.

There are currently 670 vessels of opportunity like Kruse's helping skim the oil, Laferriere said.

Meanwhile, in the bigger picture, attention was on the resumption of deepwater drilling in the Gulf.

Paving the way for drilling to resume, a federal judge on Thursday denied a request to keep a six-month moratorium in place pending a government appeal.

U.S. District Judge Martin Feldman in New Orleans, Louisiana, issued a preliminary injunction against the ban Tuesday. The government had asked Feldman to delay lifting the ban until an appeals court reviewed the issue later this summer.

The moratorium was imposed by President Obama on May 27 after the April 20 explosion aboard the Deepwater Horizon drilling rig off the coast of Louisiana triggered an underwater oil gusher. The moratorium prohibited drilling in more than 500 feet of water and prevented new permits from being issued.

In an emergency hearing Thursday, the judge denied the government's motion to stay his decision pending appeal "for the same reasons given" Tuesday for issuing the injunction.

Government lawyers did not file an appeal to the Fifth Circuit Court of Appeals Thursday, though the expected move could come as soon as Friday.

In Tuesday's ruling, Feldman wrote, "An invalid agency decision to suspend drilling of wells in depths of over 500 feet simply cannot justify the immeasurable effect on the plaintiffs (oil drilling support companies), the local economy, the Gulf region, and the critical present-day aspect of the availability of domestic energy in this country."

Sen. Mary Landrieu, D-Louisiana, responded, "When your team was in charge, which would be under the previous administration, you didn't leave a very clear instruction book as to how to do this. And in defense of this administration ... the president is trying to rise above partisanship. And I think we all have to make our best effort to do this. This is not a time to try to take what I would consider a cheap shot."

CNN's Rich Phillips and Terry Frieden contributed to this report.