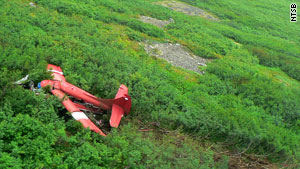 The crash occurred Monday night on a steep hillside in a remote area of southwestern Alaska.

(CNN) -- Two of the four survivors of this week's crash on an Alaska mountainside were well enough to talk with government officials looking into the cause of the crash, National Transportation Safety Board (NTSB) Chairwoman Deborah Hersman told reporters on Friday.

Both survivors recalled the pilot giving a safety briefing before the flight, she said. The survivor who sat in the front seat reported falling asleep almost immediately after the plane took off and waking up after the crash.

The other survivor told investigators "they were flying along and then just stopped flying," according to Hersman, who did not say which of the four survivors investigators spoke with.

The family of experienced pilot Terry Smith, who was killed in the accident, released a statement Friday saying, "This is a time of great sorrow for our family. Our hearts and prayers go out to the survivors and the family and friends of all those affected by this tremendous loss."

Smith had been involved in a prior accident, in 1997, said Hersman. No one was injured in that accident, in which the plane nosed over during landing. The incident was chalked up to the pilot's failure to maintain control, she said.

Those killed in the crash could not have been saved even if rescue teams had arrived at the site immediately, officials said.

The autopsies found the deaths were the result of blunt force trauma, said Greg Wilkinson, an official at the Medical Examiner's office. He said the state medical examiner, Dr. Katherine Raven, found the injuries to be consistent with this type of crash.

Raven also found that the injuries were not survivable, he said.

Meanwhile, the condition of former NASA chief Sean O'Keefe has been upgraded from critical to serious, according to the Providence Alaska Medical Center. He was the most seriously injured of the four survivors.

"Sean is making significant improvements," an O'Keefe family spokesman said on Friday. "... It does not appear that any of Sean's injuries require surgery. And we are encouraged by medical reports indicating that Sean's injuries are not life-threatening."

O'Keefe suffered a dislocated hip, which has been corrected, according to a statement by family spokesman Paul Pastorek. Despite initial reports, there was no serious trauma to O'Keefe's pelvis, the statement said.

The condition of Sean O'Keefe's son, Kevin, has been upgraded from serious to fair, said Pastorek. "Despite suffering serious injuries that have required surgery, Kevin is also showing dramatic improvement," the statement said. "Even so, he is very much on the mend."

Federal officials are continuing to probe the cause of the crash, said NTSB's Hersman. They are waiting to speak with the remaining two survivors. Investigators are also working to examine the wreckage of the plane.

"Right now, we're really in the fact-gathering stage of our investigation," said Hersman.