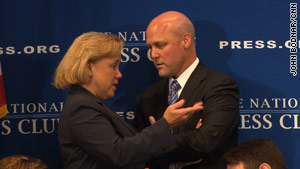 Washington (CNN) -- New Orleans, Louisiana, Mayor Mitch Landrieu walked a political tightrope Thursday in Washington, D.C., as he assessed the progress of his city for a luncheon audience at the National Press Club.

He was invited to speak to the journalism organization about the progress the city had made rebuilding on the fifth anniversary of Hurricane Katrina and what effects the recent oil spill in the Gulf of Mexico were having on the city.

Landrieu hammered BP's cleanup efforts after the oil spill, saying, "In my opinion, they're poised to cut and run."

The mayor also expressed his desire to see the ban on offshore drilling lifted, a position that puts the Democrat squarely at odds with the White House. "It is not a zero-sum game," Landrieu said of offshore drilling. "We are not limited to 'drill baby drill' or 'stop drilling forever.' We can do better. We must drill and restore."

Landrieu said the spill and cleanup efforts were a continuing threat to New Orleans and other Louisiana coastal areas. "BP and others are acting like this is the beginning of the end. It is not," he said.

"We have no confidence in the claims that much of the oil is gone." In fact, he said, a study by the National Oceanic and Atmospheric Administration released Tuesday "found 70 percent of the oil is still in the ecosystem. This is the beginning of the beginning," he said.

Even though New Orleans does not sit directly on the shores of the Gulf of Mexico, Landrieu said the city is affected indirectly in numerous economic and environmental ways. Although the numbers are not final yet, he said preliminary data has shown that tourism in New Orleans could be down by 12 percent to 16 percent so far this year.

We have had hell and high water, pain and salvation. ... Through it all, we are still standing.
--New Orleans Mayor Mitch Landrieu
RELATED TOPICS

He said the oil spill and Hurricane Katrina were two sides of the same coin. Both disasters, he said, were man-made.

The bulk of the destruction in New Orleans after Katrina came when man-made levees failed and 80 percent of the city was flooded.

Landrieu struck a hopeful tone about the progress of the city's rebuilding. "We are not rebuilding the city that we were. We are trying to create the city we want to become. The world and we deserve a better New Orleans," he said.

"We have had hell and high water, pain and salvation. We survived [hurricanes] Katrina, Rita, Ike, Gustav; the great recession and the BP oil catastrophe. And so the message is clear. Through it all, we are still standing. Unbowed, unbroken and ready to face whatever challenges come our way. Not because we want to, but because we have to."

Landrieu was elected mayor in January. He emerged from an open primary capturing more than 60 percent of the vote.

Before he was mayor, he served two terms as lieutenant governor of Louisiana, working directly with rebuilding efforts. He hails from a famous political family in Louisiana. His father, Maurice Edwin "Moon" Landrieu, was mayor of New Orleans, and in attendance at the luncheon Thursday was his "baby sister," Sen. Mary Landrieu, D-Louisiana.