Defender of the deep: The oil's not gone 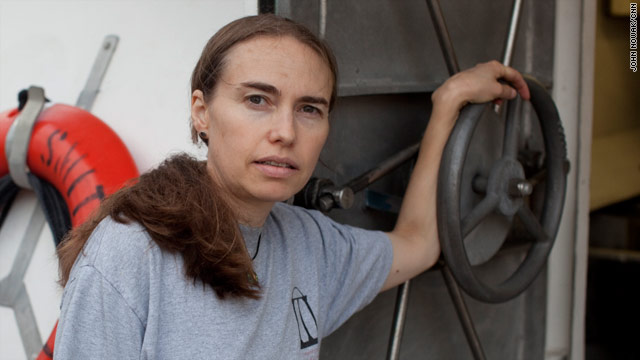 Samantha Joye, an oceanographer at the University of Georgia, has emerged as a spokeswoman for the deep ocean.
STORY HIGHLIGHTS

Athens, Georgia (CNN) -- Samantha Joye's office is littered with otherworldly artifacts from the deep ocean: a mussel the size of a football; a vase filled with tube worms, which look like grissini breadsticks; a photo of the world's biggest bacteria.

Above her cabinets, the University of Georgia oceanographer has posted two images of lunar landscapes. They're bizarrely similar, she says, to the topography on the floor of the Gulf of Mexico, the body of water that has captivated her attention for 15 years.

Joye doesn't just work in the Gulf. She lives for it. She stays up at night thinking about what makes it tick. And, like a close friend, she's become fiercely protective of it.

Four months after the BP oil spill, the wiry 45-year-old -- who looks like the librarian version of Angelina Jolie -- has been thrust into the uncomfortable position of defending this battered ocean against the perception that the environmental disaster is over.

Based on available evidence, she says, that's simply not true.

"I'm not trying to be a 'doom and gloom' pusher, but I am trying to be realistic -- and we don't have all the answers," she said. "We're trying to pretend we do, but we don't."

Video: How much oil remains?

Video: How much oil still in Gulf?
RELATED TOPICS

Last week, Joye and another scientist published a memo saying that three-quarters of the oil spilled into the Gulf -- about 3 million barrels -- remains in the ecosystem. It's out of sight and perhaps out of mind, she says, but it's not gone.

This contradicts an earlier report from the National Oceanic and Atmospheric Administration. The government's "oil budget," which was based on observations and calculated estimates, was interpreted as saying as much as three-quarters of the oil is essentially gone.

"The vast majority of the oil from the BP oil spill has either evaporated or been burned, skimmed, recovered from the wellhead or dispersed using chemicals -- much of which is in the process of being degraded," said a government news release on August 4.

Joye's defense of lingering questions about the oil spill has inspired hate as well as praise.

Her phones have been ringing nonstop. Last Tuesday, her office voicemail filled up three times before she yanked the plug on the phone in frustration.

The e-mails rolled in, too, many hitting on this theme:

"You WANTED an ecological disaster and when it didn't happen you are literally willing to do or say anything to make it look like there was," one person wrote.

Joye tries not to let these comments bother her, but they do.

Still, she says she can't back down. It's not in her nature.

The "shrimp" fights back

Growing up on a tobacco farm in North Carolina, Joye was a self-described "shrimp" -- she was short, shy, scrawny as a tube worm and hopelessly nerdy.

She was the type of kid who read the encyclopedia for fun.

But there was an intensity to her, too.

She was so competitive in basketball, for instance, that she walked on to the University of North Carolina-Chapel Hill team her freshman year.

"I could shoot the lights out," she said.

As a young girl, she found herself the butt of many jokes, in part, she said, because she had no problem telling teachers about the transgressions of her peers. On several occasions, Joye recalls ratting out classmates for picking on each other or fighting.

In one such incident in middle school, Joye confronted one of her male classmates who she thought was harassing another girl.

It backfired. Joye found herself backed into a corner, both the bully and the victim now yelling at her for meddling in their business.

That incident had a curious effect on Joye: It helped bring her out of her shell.

The shy, nervous girl stopped caring as much about what people thought.

She would stand up for what she believed in.

Hooked by the deep ocean

In 1994, when Joye took her first voyage to the bottom of the Gulf, she fell in love.

"The [submersible] dive was about three or four hours long, and I spent the entire time with my jaw on the floor, my eyes bugging out of my head and just going, 'Wow!' " she said.

Partly because of the wow factor and partly because it was so scientifically perplexing, Joye started to develop an emotional attachment to the deep ocean in the Gulf.

That attachment made it all the more painful for her to watch the oil disaster unfold.

"It is much more than an oil spill," she said. "It's kind of like an insult to your best friend, and you want to help her figure out how to make this insult go away."

Called back to the sea

Joye rushed to the Gulf's defense.

It wasn't easy. She never had left her 2-year-old daughter, Sophie, at home without her. She considered staying behind, but decided in May that she had to go.

The research trip made headlines and Joye became one of the first scientists to track an underwater "plume" of oil.

On Saturday, Joye left again for the Gulf -- this time aboard the Oceanus on a monthlong research trip.

Again, the decision to leave was difficult. Sophie had been throwing fits in the days leading up to the trip, even though Joye had tried to hide it from her.

"I pack when she's asleep, and I hide the suitcases in the car," Joye said.

Christof Meile, Joye's husband, also works in the marine sciences department at UGA. He stays home with Sophie while Joye is away. Meile supports Joye's commitment to research, especially in such a rare circumstance as the Gulf oil disaster.

He celebrated his 40th birthday on Friday, the day Joye left home at 6 a.m. to fly to Gulfport, Mississippi, where she met the research ship. But he wasn't bothered.

"I don't think my life is defined by how I celebrate my birthdays," he said.

Sophie also takes an interest in her mom's research.

"She always asks me, 'Did you fix the ocean yet?' " Joye recalled.

Defender of the deep

Joye won't return from the ocean until late September.

On the voyage, she and a team of researchers are looking for answers to what Joye sees as a number of lingering questions about the oil's effects.

Among the greatest unknowns, she says:

-- What happened to the methane? It wasn't just oil that spewed out of a pipe at the bottom of the Gulf after a BP-leased oil rig exploded and sank in April. As much as 30 to 40 percent of the fossil fuels released in the disaster were gases, Joye says, but they've largely been ignored in the accounting so far. Joye is interested in what liquid methane is doing to the deep ocean.

-- How fast is the oil being degraded? Joye says scientists have not reported the rate at which the oil is being chewed up by micro-organisms. Without that key number, it's difficult to say how much oil has left the system for sure, she said.

-- What's happening to the oxygen? Ocean microbes have emerged as heroes of the oil spill because they chew up and digest the oil. That's a good thing, but they also use oxygen in the process, and that element is vital to life in the sea. Joye said not enough is known about how much oxygen has been depleted from the Gulf, particularly in the deep water, where it can take years or decades for the water to replenish its oxygen supply naturally.

Overall, Joye says federal officials have been too quick to jump to conclusions about what an unprecedented amount of oil will do to an ocean environment.

And they haven't done enough to learn about what's actually happening to the environment, she said.

"It's being treated like 'Oh, I scraped my knee and I need a Band-Aid,' " she said. "This needs much more than a Band-Aid."

In a news conference on August 18, NOAA Administrator Jane Lubchenco said her agency is taking the situation seriously.

"NOAA, along with our partners in the academic and private research institutions and other federal agencies, remain vigilant in our efforts to track and monitor the oil from the marshes to the open ocean, from the surface to the bottom of the Gulf," she said. "And we will remain in the Gulf for as long as it takes to assess the damage and restore the ecosystems."

Joye said her biggest fear is that a lack of concern on the part of the public will mean we never devote the recourses necessary to study the oil disaster.

"It's like truth by repetition," she said. "You can paint a rosy picture, and that rosy picture is going to become a reality."

Other scientists are more tempered in their observations.

Ed Overton, a professor of environmental sciences at Louisiana State University, said scientists such as Joye should be praised for their dedication to collecting as much data as possible about the oil spill and for fostering debate about how much is known about the long-term effects.

"In general, I think [Joye's point of view] is a healthy part of the debate," he said. "I don't call it criticism; I call it discussion. I don't know why people are taking such offense at this discussion. None of us are god, for god's sake."

But he said much of the early evidence shows damage in the Gulf is not nearly as bad as was initially thought.

"What we've got is a patient that's been in a horrible accident," he said of the environmental damage to the Gulf, adding: "As it looks right now, we don't have a broken back; we might have some broken arms."

Joye's mother and sister said they are surprised by the attention she's drawn, but not by her willingness to voice what may be an unpopular opinion.

"She was sort of blindsided by the attention," said her sister, Jenn Epperson, a geologist in California. "It's different. A lot of people who trumpet about things are doing it for the attention. She was doing it just because she is the way she is.

"She is fierce when it comes to something she cares about."