Six months later, what did we learn from the oil disaster in the Gulf? 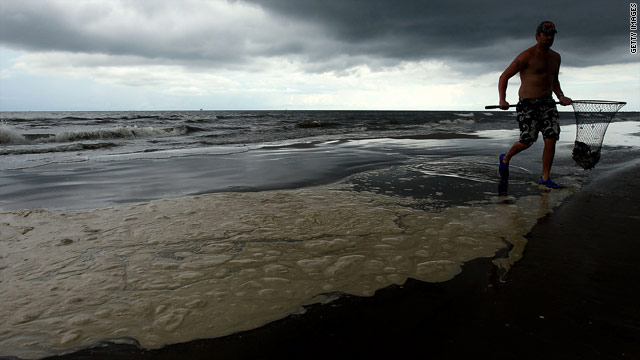 Ricky Breaux wades in from the ocean near a pool of dispersed oil on a Louisiana reopened beach in August.
STORY HIGHLIGHTS

(CNN) -- It was May when a fishing boat carrying Ed Overton and other scientists pulled away from what would become the largest accidental oil spill in history. The ocean was soupy and brown. The air tasted like gas. Some reporters looked green in the face. The oil stretched nearly from horizon to horizon.

Overton, sitting on a beanbag in the back of the boat, was upset.

"It just irritates the piss out of me that we were not prepared for a situation like this and didn't have studies on these issues," the Louisiana State University professor said as the boat skipped waves through the coastal marshes, heading back to shore. He added that he "should have raised more hell" about how the U.S. was unprepared to deal with a disaster of this magnitude.

But, even then, Overton saw a sparkle in the muck:

Maybe we all will learn something from this experience, he said.

Six months after a BP-owned offshore oil rig exploded, setting off a violent leak 5,000 feet below the surface of the Gulf of Mexico, there is still much debate about what the United States has or hasn't learned from this disaster. As other issues -- like November elections and Chilean miner rescues -- dominate news cycles, there are also accusations that we've all turned a blind eye to the nagging problems that caused such an enormous spill in the first place.

Some things have changed in the past half-year, though.

Much of the focus has been on preventing another oil spill.

The Obama administration has issued a number of rules that aim to prevent offshore drillers from chasing petrol profits at the expense of safety.

The Department of the Interior, for example, now requires oil companies to get independent audits of their blowout prevention systems, those hulking metal contraptions that are supposed to snap oil risers in the case of an underwater explosion, and which failed on the Deepwater Horizon rig. Oil rigs also will be subjected to surprise inspections by federal regulators, according to Reuters.

Chalk up part of the change to marketing, perhaps, since that troubled agency has been rebranded as the Bureau of Ocean Energy Management. But the administration also separated the agency into two pieces: one that acts as a watchdog on offshore drilling, enforcing safety regulations and conducting inspections, and another that profits from issuing more offshore drilling leases.

That situation still creates a conflict of interest at the agency that has direct responsibility for keeping the risky offshore drilling industry safe, said Steven Cohen, executive director of the Earth Institute at Columbia University in New York. But, he said, it's better than what happened before the spill.

"What's clear is that they weren't even enforcing the regulations on the books, and what's particularly striking about this incident is that the corporations that were running this [deepwater drilling] well really weren't subject to significant and serious inspections and regulations," he said.

The U.S. House of Representatives passed a bill in July that would have addressed and funded these issues, Cohen said, but it did not make it to the Senate. Current efforts to regulate the industry are underfunded, he said.

The Obama administration appointed a task force to re-evaluate the country's regulation of offshore oil exploration. A final report from that commission is due out on January 12.

Others say the spill has taught us that we should aim for the root of the problem here: the United States' addiction to oil and fossil fuels.

Reduce the amount of energy the country uses, and you inherently reduce the risk of another spill, said Peter Lehner, executive director of the Natural Resources Defense Council, an environmental advocacy group.

If energy consumption is cut, "we won't have to push quite so hard to get the oil, whether it's from foreign sources or from drilling somewhere," he said.

Cohen, of Columbia, said this lesson is harder-learned.

"We are completely addicted to fossil fuels. Our economy requires it, and we don't have any real plausible alternatives at this point," he said. "We're basically junkies. So, yeah, one junkie [overdosed]. That doesn't convince the other junkies not to shoot up."

Out of that sentiment has come an unfortunate lesson, he said: "In general, people have learned that [offshore drilling for oil] is a riskier and short-term strategy, but as of right now, there's no alternative."

Both Cohen and Lehner bemoaned the fact that the U.S. Congress has failed to pass energy legislation that addresses this fossil-fuel dependence. The oil spill appears not to have been enough to sway public opinion -- or politicians -- on the matter.

Other efforts focus on responding to future spills.

Erik Milito, director of upstream and industry operations at the American Petroleum Institute, a lobbying and trade group, said the oil industry is better equipped to deal with another spill after its experience in the Gulf.

"We really were facing a situation that we had not faced before," he said of the Gulf spill, which was unprecedented both in the amount of oil that was spilled and in that the spill happened more than a mile below the ocean surface. "We believe we're in a situation now to be able to cap a well a heck of a lot quicker."

Milito referenced a $1 billion commitment from four major oil companies -- Exxon Mobil, Chevron, ConocoPhillips and Royal Dutch Shell -- to create a rapid-response system to be used in the case of a future spill.

"This event, hopefully, was an aberration. We believe it was. It was a freak occurrence," he said. "It was tragic. But we believe it was an isolated event."

Cohen said the public relations pressure exerted on oil companies after the BP disaster also creates an incentive for them to operate more safely.

"It's a staggering amount of money that this thing is going to end up costing BP," he said, "so I think everybody has learned their lesson pretty strongly."

He said he hopes the spill inspires a U.S. clean energy policy.

"We really don't have a good sustained energy policy for the this country. Everybody says we've got to go to renewables, but you and I won't see that in our lifetime," he said. "But the step toward that starts now. If we don't come up with reasonable ideas and reasonable efforts, we won't be there in 20 years or 30 years or 40 years."