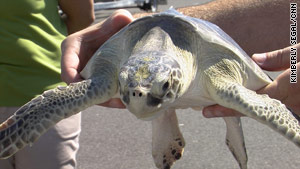 Kemp's ridley turtles were among those released into the wild off Florida in August.
STORY HIGHLIGHTS
RELATED TOPICS

(CNN) -- Months after rescuers found them struggling and covered in oil, 33 endangered and threatened young sea turtles are finally going home to the Gulf of Mexico.

Scientists from the National Oceanic and Atmospheric Administration, the Louisiana Department of Wildlife and Fisheries and the Audubon Nature Institute freed the turtles Thursday in waters about 40 miles southwest of Grand Isle, Louisiana.

This marked the latest mass release of turtles since about 500 were rescued in the weeks and months after the massive months-long oil spill.

"We were able to release these turtles because they're now healthy, and we're seeing recovery in the surface habitats of the Gulf of Mexico," NOAA Administrator Jane Lubchenco said in a news release.

The spill began after an April 20 explosion on the offshore drilling platform Deepwater Horizon that killed 11 men. Two days later, the platform sank and oil started gushing into the Gulf. In early August, owner BP used cement and mud to plug the damaged Gulf of Mexico well.

Officials formally declared an end to the oil spill disaster on September 19, though considerable efforts remained to clean up area waters and revive wildlife affected by the spill.

Earlier this month, NOAA reopened federal waters off the Louisiana coast to fishing. Thursday's release marked another milestone in the area's recovery, according to those involved.

"Returning this group of sea turtles to their home waters is ... a sign that Louisiana is on the path towards recovery," said Randy Pausina, an assistant secretary for Louisiana's office of fisheries.

The 33 turtles had been rescued more than three months ago by federal officials and state wildlife authorities from Louisiana, Florida and Georgia, as well as the Riverhead Foundation and the In-Water Research Group. They were rehabilitated at the Audubon Nature Institute in New Orleans.

They included green, Kemp's ridley and hawksbill sea turtles, which are classified as endangered species. There also were loggerheads, which are a threatened species.

With 270 turtles having been cleaned, nursed back to health and released, there are more than 200 still in rehabilitation sites around the area.

Scientists did extensive aerial and shipboard tests earlier this week on the waters near the release point, making sure the sargassum algae was clean. Young turtles thrive in such areas, which provide protection from predators and ample food, including small crabs, snails and other creatures.

"Six months ago, it was nearly impossible to imagine this day would ever come," said Ron Forman, the Audubon Nature Institute's CEO and president.